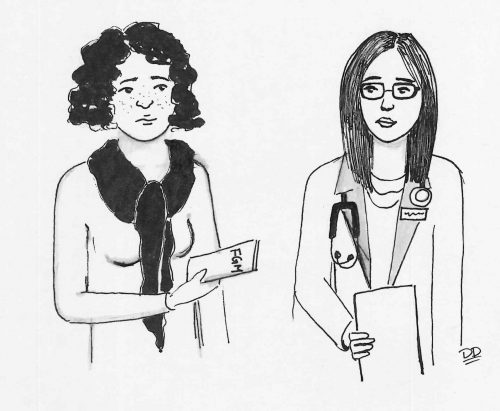 FGM, also referred to as female genital cutting or circumcision, refers to any practice that includes a total or partial removal of the clitoris, labia majora, labia minora or any procedures to the female genitalia by incision or cutting – and is usually for cultural, religious or non-medical reasons.

FGM, which is categorized in four different types, is often associated with cultural ideas of femininity and modesty, rooted in the belief that girls should not have body parts that are considered unclean, unfeminine or male, according to the World Health Organization.

The 10 states in the U.S. with populations most at-risk of FGM are California, New York, Washington, New Jersey, Minnesota, Ohio, Texas, Georgia, Virginia and Maryland, according to the Population Reference Bureau.

The AHA Foundation, named after founder and FGM survivor Ayaan Hirsi Ali, is a nonprofit organization for the defense of women’s rights.

Kaitlyn Carwin, who assists with policy matters for the AHA Foundation, is currently working with federal legislators to increase the federal penalty for perpetrators of FGM from five to 15 years. She is also working to direct funding for education and outreach to communities and professionals likely to encounter survivors and girls and women at risk.

“FGM is seen as a way of controlling a girl’s libido and reducing her physical pleasure,” Carwin said. “There is this assumption that if these things are not done then women would be engaged in promiscuous behavior which is just wrong. It derives out of the assumption that women are born unclean and there are health benefits to the procedure which is just absolutely wrong.”

The WHO lists many medical complications from FGM like direct complications from the procedure, such as anesthesia complications, bleeding, acute infection, and increased risk of death for both mother and infant in subsequent pregnancies, as well as post-traumatic stress disorder, urinary tract infections and psycho-sexual issues.

Vergoth, a psychotherapist and founder of Forma, a non-profit organization that provides mental health care to FGM survivors, has been an activist against FGM for over 20 years. She first learned about it when she was in Egypt and came across English newspapers with FGM statistics.

“If I raise awareness about this issue to people who have never heard of FGM, I feel so gratified,” Vergoth said. “I am on a mission.”

Countries with the highest rates among girls and women ages15-49 are Egypt with 27.2 million affected; Ethiopia with 23.8 million; Nigeria, 19.9 million; and Sudan, 12.1 million, according to UNICEF.

In U.S. v. Nagarwala, the first federal prosecution case to address FGM, U.S. District Judge Bernard Friedman ruled that the 1996 federal law banning FGM was unconstitutional. He dismissed key charges against the defendants and called into question the constitutionality of the federal anti-FGM law.

Friedman threw out mutilation and conspiracy charges against all defendants charged in federal court for connection with the genital mutilation of nine girls from Michigan, Minnesota and Illinois between 2015 and 2017. Prosecutors allege Jumana Nagarwala, a U.S. doctor who was charged for performing FGM, may have subjected up to 100 girls to the procedure over a 12-year period.

Friedman asserted that FGM criminalization rested with the individual states, not the federal government.

Since the federal law against FGM was declared unconstitutional and the Department of Justice chose not to appeal the decision, Vergoth and her team are continuing work to promote legislation in every state that does not have an anti-FGM law.

Vergoth refers to FGM as a culturally sanctioned trauma; a trauma not reflecting religious ideals, but rather tribal.

There are generally four types of survivors: those who feel terrible side effects and consequences, those who recognize this is a tradition and do not feel side effects, those who suffer in silence, and those who show immense pride and feel stronger having undergone FGM, Vergoth said.

She said people often assume this happens to only Muslims, but it happens to a variety of people like Ethiopian Jews, protestants in Somalia and Catholics in Nigeria. The practice itself was first talked about by the ancient Greek historian Herodotus in the 5th century B.C.

“FGM is a very ancient practice,” Vergoth said. “The fact that this has been going on for 2,000 years is daunting.”

Women who have undergone FGM may suffer not only from complicated medical consequences, but also from psychological distress and psycho-sexual difficulties.

Vergoth said the hardest part about her advocacy work to help survivors of FGM, is to honor what the survivor has been through while simultaneously voicing disapproval against the practice.

“Cultural sensitivity is key when working with this population,” Vergoth said. “You may feel like this is a bad tradition but demeaning a population is something you cannot express. It makes the woman who has undergone this practice feel very demeaned. It is important to say ‘I know this is what happened to you but we have to stop this because there are no benefits from this.’”

Carwin, alongside members from the AHA Foundation, submitted an amicus curiae brief in U.S. v. Nagarwala, defending the constitutionality of the federal anti-FGM law.

“We believe that it is incumbent upon both the individual states as well as the federal government to outlaw FGM and believe both levels of government have the authority to do so.”

Carwin said her general interest for law, domestic and international politics, and developments in cultural and demographic landscapes in the U.S. spurred her interests in the topic of FGM.

Carwin said she became interested with the foundation when she learned about Ali, founder and survivor of FGM, while she was in college.

“I admired her intelligence, insight, and her willingness to speak out against injustices that many were unwilling to acknowledge,” Carwin said. “I became aware of FGM after reading some of Ali’s writings.”

“The majority of our work takes place on the state level, so we see what states are working on to criminalize FGM within their borders,” Carwin said. “The federal law is very limited in what it can do, so states really need bills that are going to ban the practice and address the issue with local authorities, service providers and law enforcement.”

Carwin speaks to state legislators and their aids to help provide a written testimony with information needed for the passage of bills that aim to end the practice or at least criminalize FGM.

“AHA’s experts developed specialized trainings that cover honor violence, explain forced marriage, and FGM for professionals who are likely to encounter survivors and at-risk girls,” Carwin said. “Due to the distinctive nature of the culturally based abuses that we address, particularized training is necessary for law enforcement and other service providers so that they may properly identify victims and successfully handle these cases.”

Carwin said when she tells people about the work she does they asssume FGM only happens in third world countries.

“This is a pervasive practice that is based on patriarchal and oppressive outdated norms and customs,” Carwin said.

“There are a number of misconceptions that pervade these communities that practice them regarding the supposed necessity of having this procedure done.”

Oguntola created a platform called Open Conversations, a conference in the UK that brings together experts and survivors to address issues and topics that are deemed taboo.

This year the topic will focus on FGM, forced marriages and honor killings.

“In the UK, lawmakers, teachers and people in authority are normally from communities who do not have these practices, so it goes under the radar and girls suffer,” Oguntola said. “I want us to talk about it and make it less of a taboo in order to protect girls.”

“I grew up in The Gambia and did not realize until last year that 74% of girls had undergone FGM, Oguntola said. “That is the extent of the secrecy around the practice.”

The Sustainable Development Goals in 2015 calls for a complete eradication of FGM by 2030 under Goal 5 on Gender Equality; this will eliminate harmful practices, such as forced marriage and FGM.

In a 2016 study in Public Health Report, researchers from the CDC estimated that more than half a million women and girls in the U.S were at risk of FGM and its consequences in 2012.

That is more than triple the number when the CDC last assessed the issue in 1997, a year after Congress passed a law making cutting illegal in the United States. According to the researchers, this increase is a result of the exponential growth in the number of immigrants from countries that practice cutting.

Alissa Rosas, information and research specialist for a non-profit organization called Bridging Refugee Youth and Children Services, creates resources for families who have been exposed to FGM and are now resettling in the U.S.

Funded by the Office on Women’s Health, BRYCS created a sector dedicated to helping those affected by FGM through community based and community organized research development.

Rosas assisted in facilitating and moderating the focus groups and reached out to community partners throughout the U.S. to determine the necessary resources.

In year two of the project, Rosas said many women who were pregnant or had small children asked them to provide resources about pregnancy and childbirth in the U.S. Many service providers have minor ability to deal with patients affected by FGM.

“The women we spoke to were saying their interactions with medical providers can be difficult and come as a shock,” Rosas said. “They wanted a brochure they could give to the doctor saying ‘I have been affected by FGM and this is the help that I need.’”

Service providers were unsure how to treat these patients and would often bring in their colleagues and students and say, ‘Look at this’ without the consensus of the patient, Rosas said.

“We have really gotten a lot out of this community engagement and producing resources that have been vetted and are useful,” Rosas said.

“As a resettlement agency, we put out so many different things that are focused just for the service provider or just one community and with this we had the chance to turn the tables and really learn from the community rather than teaching.”

Although many organizations are established to address FGM and help women affected, it is important to continue the conversation and approach those affected in a sensitive manner, Carwin said.

“Cases involving survivors and at-risk girls need to be handled by service providers delicately, and in a culturally-competent manner in order to provide the protection that they need,” Carwin said. “When it comes to these abuses, there is very little room for trial and error, as a misstep in handling such cases can have grievous consequences.”

Layla Abbas can be reached at  layla.abbas@laverne.edu.