By Melody Blazauskas, Nicolette Rojo on September 28, 2018 in LV Life 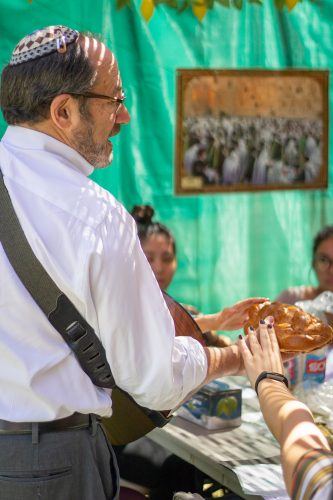 Cantor Paul Buch of Temple Beth Israel in Pomona kicks off the first day of Sukkot by blessing the bread before it is eaten on Monday in Sneaky Park. The Sukkah was built in Sneaky Park Sept. 20 to prepare for the week-long Jewish festival of Sukkot. The Sukkah is built so Jews have a place to dwell and feast during the celebration, which ends on Sunday.

The Office of Religious and Spiritual Life, the Center of Multicultural Services and the Hillel club, held a celebration in the Sukkah to celebrate the Jewish holiday of Sukkot Monday at Sneaky Park.

A Sukkah is a temporary fixture meant to symbolize the huts that Israelites dwelled in during the 40 years they wandered through the desert after escaping slavery in Egypt.

They built a Sukkah to live in for a week and to celebrate the discovery of the promised land by having a stuffed feast and harvest inside it.

The festival is celebrated the fifth day after Yom Kippur and is known to be one of the most joyous Jewish holidays.

“The Sukkah itself is built in a way that it is shelter, but doesn’t protect you from all of the elements,” said Zandra Wagoner, university chaplain and assistant professor of philosophy and religion.

“By reproducing this experience, it’s recognizing that God still cared for the Israelites all that time.”

Sukkot is one of the three Biblically commanded pilgrimage festivals that is typically held on a full moon.

The holiday is set by the Hebrew calendar because the Jewish aim to stay in sync with the solar cycle.

Cantor Paul Buch from Temple Beth Israel in Pomona shared why the Sukkot is celebrated in a Sukkah and the purpose of spending time underneath a full moon.

“If you’re harvesting, you can save more later into the night since there’s at least light in the sky,” Buch said. “When you harvest your crops, regardless of your religion, you have a sense of completion and the connection with the earth, along with the bounty and fertility that need to be celebrated.”

A few student leaders who associate with Judaism and interfaith relations, publicized the holidays.

Nicole Temple, Hillel president and junior biology major, said she participated in the celebration because of Sukkot’s popularity across society and the importance of the holiday.

“It encourages spending time outdoors and amongst loved ones,” Temple said. “I wanted to share this feeling with La Verne.”

Interfaith leaders on campus serve to fulfill one of the University’s core values, diversity and inclusivity, by sharing the importance of celebrating as many holidays as possible.

Lao said it is important to engage with students who are not aware of cultures and holidays outside of their own religion or culture.

“I’ve attended the Sukkah blessing for the past three years because I love Cantor Paul’s explanation of the multilevel symbolism of the temporary shelter of the Sukkah through song and demonstration,” Lao said.

“I feel like we should organize celebrations from other religions as well because holidays and celebrations are meaningful and engaging ways to introduce students to religions and cultures outside of their own.”

Temple hopes that Sukkot becomes a more known holiday and that students know that they are celebrating and participating by just eating their food under the Sukkah.

Lao said that a potential challenge for planning any religious celebration or event would be the ability to reach out to a variety of students who are interested in attending them.

“The challenge will be reaching a wide range of students who would be interested in attending or organizing them,” Lao said.

“And also broadening our scope to include eastern cultures and establishing those events as annual traditions that show the University’s commitment to diversity and inclusivity,” Lao said.