By Andrew Alonzo, Melody Blazauskas on September 21, 2018 in Football, Sports 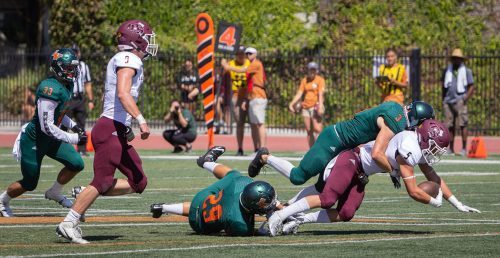 Ortmayer Stadium was at full capacity and volume on Saturday as the Leopards took on the Puget Sound Loggers.

La Verne struggled with penalties, which cost them the game. La Verne also found it difficult defensively against the quick-firing offense and fell to the visitors, 56-28.

“We were trying to execute our game plan every time we got on the field. “The score may not have looked like it but everyone was giving their all,” senior cornerback Santiago Rocha said.

The Loggers started the game after receiving the kickoff at their own 25-yard line.

The Loggers established their passing game early on with sophomore quarterback Murdock Rutledge finding junior receiver Alvin Johnson and senior Collin Heimbach to move them 75 yards down the field after a 10-play drive.

Rutledge finished the drive with an 18-yard completion to Heimbach and put the Loggers up, 7-0.

The Leopards had trouble finding their rhythm both offensively and defensively in the first quarter. The Loggers capitalized, and on their second possession they started running a hurry-up offense.

The Loggers started from their own 8-yard line. Rutledge was hot and on this drive was looking for junior wide receiver Jewell Day.

Murdock drove the Loggers 69 yards before capping off the drive with a nine-yard completion to Day to make the score 14-0.

The air raid against the Leopards continued as Rutledge drove the Loggers deeper into Leopards’ territory.

The Leopard defense held the Loggers at the 20-yard line after a two-yard catch by sophomore receiver Matt Marengo.

La Verne forced Rutledge to turn the ball over on downs after three incomplete passes to junior receiver Michael Zabran and Johnson.

La Verne senior quarterback Josh Evans and the Leopards looked to turn the second quarter in their favor.

But on the first play, Evans was sacked for a loss of nine yards and fumbled the ball, which was recovered by Puget Sound senior linebacker Keanu Songcuan on the Leopards’ 3-yard line.

After a failed rush by Puget Sound junior running back Duncan Varela, Rutledge found junior receiver Ethan Goldizen in the end zone for the 8-yard reception and touchdown to extend Puget Sound’s lead to 21-0.

The Leopards came back after the touchdown with energy and struck back quickly.

Hunter finished the drive with a 10-yard rush to get the Leopards on the board at 21-7.

Puget Sound responded with a touchdown of its own after the Leopards’ score.

“There were way too many penalties. Every time we had a good play we’d get a holding call. Then I’d bring us back ten more yards,” said Evans.

Rutledge and the Loggers took the momentum of their passing game and made it the focal point going forward.

The half ended with the Loggers stamping their superiority once more as Rutledge pounded the Leopards defense before Varela took it in for the one-yard rush to make it 28-7.

“We started off slow in the first half but we picked it up going into the second half,” junior offensive lineman Joseph Wittmer said.

“But we need to start off all four quarters like that.”

To start the third quarter, Gonsalves aided the offense in driving the ball 62 yards from La Verne’s own 29.

Late into the third quarter on the ULV 47, Evans found freshman receiver Austin Haines for a 48-yard reception to set up first and goal for the Leopards.

Hunter capped off the drive with a five-yard rush to end the third quarter with the Leopards still down, 49-21.

The fourth quarter saw both teams get their final touchdowns, leading to a final score of 56-28.

“All three levels [offense, defense, special teams] have to own it,” defensive coordinator James Stewart said.

Stewart also said the game was lost as a team.

“We all played our part in some degree,” Stewart said.