In honor of Women’s History Month, the Center for Multicultural Services hosted “Her Stories” Wednesday, in which University of La Verne faculty, staff, students and alumni gathered to share their life changing experiences.

“A lot of the times you see a person in a certain position, but you don’t know their story,” Misty Levingston, associate director of multicultural affairs and Black student services and host of the event, said. “Everyone has a back story that’s rich and important to share.”

Cindy Vallejo, associate director of student life, introduced each speaker. They each told stories of their backgrounds or of experiences that had an impact on their lives.

“I want you to know there is value in taking risks and learning from failures across life’s journey,” said Shannon Mathews, dean of the College of Arts and Sciences, in a letter to her younger self that she read during her speech. “Risk and failures are a vital part of the human experience.”

Brenda Ash-Murphy, senior marketing data analysis major, shared her empowering life’s story in the span of seven minutes, enough time to have members of the audience fighting back tears. She shared her hardships of being in the foster care system and the military, which led to her applying to ULV after attending Chaffey College. When her application was declined, her younger sister encouraged her to appeal it, going as far as to set up a meeting with a counselor for Ash-Murphy to meet with. She did just that and got in, earning her bachelor’s degree in business and later enrolled at ULV for her master’s degree. She described her little sister as her light, saying that without that push, she wouldn’t be where she is now.

Rita Thakur, associate dean of the College of Business and Public Management, shared her story of immigrating from India to America in 1971. She said that when she left India she had been practicing law, but had to find a job washing dishes in a cafeteria when she arrived in America. When she wanted to apply for her Ph.D. she had considered the University of Missouri, until she had a conversation with the head of the department of law. He had told her that she would never get an assistantship there because she was a woman and foreigner, which meant she couldn’t teach men or Americans how to do business.

“My values tell me you have to fight when there is discrimination,” Thakur said.

“It’s very important for us, as women, to find that inner voice to stand up for ourselves,” Jazmin Alvarez Barragan, coordinator of student life operations, said after Thakur shared.

Speakers also shared their stories with songs and poems.

“You girls are the diamonds who are made in the rough, who will never quit when the going gets tough,” Scheradyn Hall, sophomore philosophy and business administration major, said in her original poem, “For the Girls.”

Lorali Mossaver-Rahmani, a ULV graduate, shared a video in which she covered the song “Polly Ann’s Hammer” by Our Native Daughters. She said that since Polly Ann’s story is one that has been left out of our history, she was excited to share her cover and to tell her story. The song’s lyrics paint a picture of a woman picking up her husband John Henry’s work when he falls ill. Polly Ann shows that she can lift up the hammer and drive steel just as well as any man can.

The atmosphere of the event was empowering as each of the speakers and attendees gave their entire focus to whomever was sharing, even applauding after each person shared.

“Everybody has a story that’s empowering,” Levingston said after the event. “It’s important for us to value and cherish that.”

Taylor Moore can be reached at taylor.moore@laverne.edu.

Taylor Moore is a junior broadcast journalism major and social media editor for Fall 2022. In her third semester on Campus Times, she has previously served as the LV Life editor and staff writer. 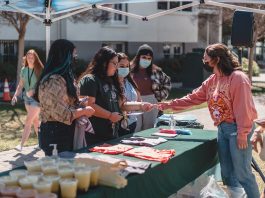 Leopards socialize in the Quad with boba and snacks 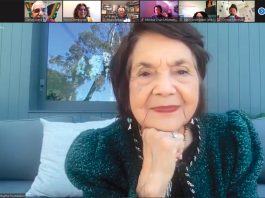