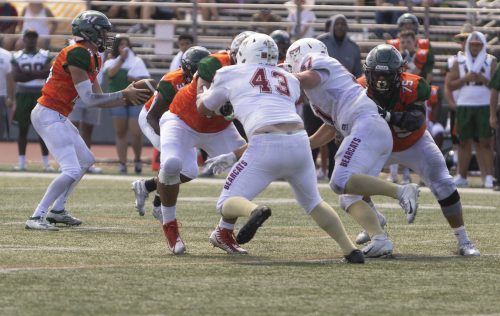 Senior quarterback Sam Taylor fakes a handoff to junior running back Keishawn Robinson against Willamette on Saturday at Ortmayer Stadium. The Leopard running backs had a field day against the Bearcat defense, mustering 375 yards in their 43-33 win. / photo by Melody Blazauskas

The Leopards football team celebrated its first win of the season with a 43-33 victory over the Willamette Bearcats at Ortmayer Stadium on Saturday.

The victory came after a tough loss to No. 11 ranked Whitworth, in which the Leopards surrendered 50 points and over 540 yards of offense.

The game held great historic significance as it was the first time in college football history in which both teams had a female football player on their active rosters.

While Gordon played as the starting kicker for Willamette, Makekau unfortunately did not make an appearance in the game.

The Leopards found quick success on their first drive of the game.

The drive was capped off with a 19-yard pass from Taylor to sophomore receiver Spencer Pool to take an early 7-0 lead.

The Bearcats responded on the following drive, moving the ball 75 yards before senior quarterback Mathew Castaneda found graduate receiver Jordan Jenkins in the end zone for their first score of the game.

Gordon’s extra point attempt was blocked and returned 98 yards by senior cornerback Torii Hilbert to give the Leopards a 9-6 lead in the first quarter.

The combination of Castaneda and Jenkins proved to be an early problem for the Leopards’ secondary in the first half.

The duo connected for three touchdowns in the first half alone.

The Leopards followed up their next few drives with impressive scores, including a 22-yard rushing touchdown by senior running back James Gonsalves to build a 23-13 lead late in the first quarter.

“I hit the hole hard. I remember a guy tried to grab my jersey,” said Gonsalves. “I broke off of that, it was one-on-one. I wanted that touchdown more than he wanted that stop so I was able to get in the end zone.”

“We were just running the same play down the field and it was working,” said Taylor. “The linebacker crashed down, it was an easy pull, it gave us momentum going into halftime.

The Leopards’ halftime adjustments proved to be effective as they were able to shut down Willamette’s Jordan Jenkins and limit him to just one catch in the second half.

Jenkins stood about a foot taller than anyone on the Leopards’ defense, but to players like Torii Hilbert, it’s all a mental game.

“It’s not about ability,” said Hilbert. “He’s 6-foot-5, I’m 5-foot-10, so at that point I have to use something that has nothing to do with skill and that’s my mentality.”

That approach worked well for Hilbert, who was able to bring in a crucial interception in the end zone – intended for Jenkins late in the third quarter.

Thanks to a dominant running game led by Gonsalves and senior running back Martaveous Holliday, the duo was able to keep the ball out of Willamette’s hands, rushing for over 250 yards.

The Leopards would hold on to the lead and get a 43-33 victory over the Bearcats.

With the win, the La Verne now improves to a 1-1 overall record.

The victory was satisfying to head coach Chris Krich, who is happy with what he saw from his players. There’s just one thing he feels his team needs to work on.

“We just have to eliminate our mistakes,” said Krich. “But I thought our guys played really hard, they ran hard, there’s a lot of great things we saw out there.”

The Leopards head to Tacoma, Washington, next for a tough battle against the Loggers from Puget Sound University at 1 p.m. Saturday.