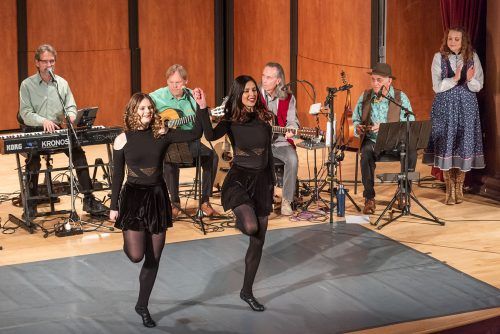 Award winning dancers Tasha and Julia Straszewski perform traditional Irish dances on Sunday in Morgan Auditorium. The dancers were featured in “Spirit of Ireland,” featuring Michael Ryan and Friends, as part of the Sundays at the Morgan monthly showcase of music. The next event, Best of La Verne, is on May 5. / photo by Katelyn Keeling

An Irish flair filled Morgan Auditorium Sunday as Instructor of Music Michael Ryan and his band performed “Spirit of Ireland” for the Sundays at the Morgan concert series.

The auditorium was packed with audience members as they filed in to watch performances ranging from contemporary styles of music to more lively Irish pub songs in a celebration of Irish culture.

The performers kept the audience engaged with a stimulating production as they encouraged the crowd to clap and sing along with them.

The music switched frequently from serene melodies to more upbeat tempos as the musicians were accompanied by dancers who performed traditional Irish dances.

After the concert, various audience members were complimenting the performance as they made their way to the stage to meet the performers and buy their CDs.

The “Spirit of Ireland” band began with an idea from Ryan eight years ago, and have been together ever since.

“I knew one dancer so I thought, ‘OK, I have the music, I have the dancers but I need an Irish pub band,’” Ryan said.

“I sought out the band members, Danny and Dylan, and asked if they wanted to do a show,” Ryan said. They said yes and we performed together at the Candlelight Pavilion. That’s how we started and kept on going.”

Each member has played instruments since early childhood, and said they enjoyed the fun experience of being in the band overall.

Having developed strong relationships with everyone in the band, they all love to bounce ideas off of each other, they said.

Several members of the band were once students at the University of La Verne, such as bass player Julian Johnson, who graduated in 2007 and was part of the music department during his time on campus.

Ryan sought out Johnson specifically to join the “Spirit of Ireland” group, where he has been playing music with them ever since.

Singer Katherine “Kitty” Tereszczuk, junior psychology and music major, said this was her first time performing with the band.

“In the fall semester, I took his ensemble course and for our recital he let me present a song that I had been working on,” Tereszczuk said. “After he heard me sing, he said that there was a singer in his group that I should do a duet with and I thought that would be cool,” she said. “It’s really fun because everyone is always joking and super supportive.”

Flute, penny whistle, singer and wooden spoons player Hai Muradian said, in regards to preparing for shows, it is not a difficult process because they generally already know the songs.

Practicing is more about just finalizing and tweaking the songs, he said.

He and Ryan have been playing together for about 20 years, and he said rehearsals are usually fun and go by pretty fast because everyone tends to joke around with one another.

Michael Ryan and Friends will perform a Spanish-themed concert titled “Gypsy Passion” on April 12 at the Grove Theatre in Upland. Tickets for the show only, starting at 7:30 p.m., are $35. Tickets for dinner and the show, starting at 6 p.m., are $55. All proceeds will go to Providence Children’s Home in Kenya.