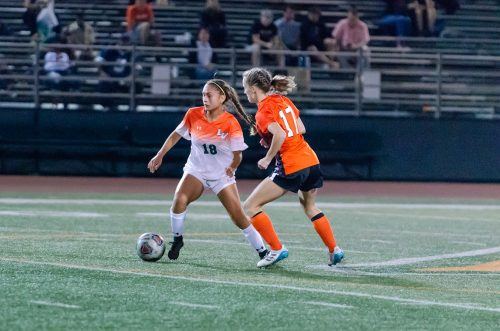 Freshman defender Gizzel Sulca looks down field for an opening to pass the ball. The Leopards fought hard on Saturday to snag a 2-0 win against Caltech at Ortmayer Stadium. The shutout was the Leopards’ first win of the season. / photo by Katelyn Keeling

The women’s soccer team took on Caltech at Ortmayer Stadium on Saturday and dismantled the Beavers, 2-0.

Senior forward Andrea Story truly took the game over by providing both a goal and an assist.

“We were really going into this game positive and wanting to get the girls to make things happen while sticking to our game plan,” assistant coach Chelsey Patterson said.

The Leopards lined up in a 4-4-2 formation with a high pressure system to disrupt the midfield and pounce on any loose ball that Caltech played.

Senior midfielders Anna Ottley and Ari Dowell dominated the center of the field breaking up plays, winning possession back for La Verne and did not let Caltech establish a rhythm to the game.

Caltech started the game quickly swarmed by the Leopards. Caltech struggled to clear the ball from their own backfield and their passes to one another were sloppy.

La Verne took advantage of Caltech’s weakness to the press and made the game their own.

“We knew we were going to be able to possess more so we wanted to work on switching the plays and knock the ball around,” senior midfielder Dani Hoyle said.

After a foul by Caltech’s freshman midfielder Schuyler Dick in the fifth minute, senior midfielder Mia Trugerro put in a low cross that was comfortably saved by the Caltech’s sophomore keeper Kali Drango.

That would prove to be her easiest save of the night.

Caltech tried to replicate La Verne’s ball-control style but to no avail, the Leopards pressure was too much.

A handball by Caltech in the 13th minute off a loose ball in the midfield set up Story to take the ensuing free kick.

Story’s kick was a simple, low driven shot to the left that the keeper could not get down to in time.

The goal, as well as La Verne’s fullbacks Trugerro and McKenna Posada dominating the flanks, prompted the Beavers to switch from their 4-4-2 formation to a narrower 4-3-1-2 formation.

Two minutes after the first goal, Story turned from scorer to provider for Trugerro who made a beautiful run in between the Caltech center backs to make it 2-0.

A quick one-two passing play between the two allowed the space for Trugerro to run into.

Story waited for Trugerro to beat the offside before playing the ball that cut through the defense like a hot knife through butter and Trugerro tucked it away into the bottom corner.

It was smooth sailing for La Verne for the rest of the first half.

Their possession game took a toll on Caltech who seemed lethargic after conceding the second goal and the Leopards were playing with buckets of confidence.

“I think we should have like five or six. We had a lot of shots on goal, they were just saved by the keeper or post,” Posada said.

La Verne kicked off to start the second half and picked up possession from where they left off.
However, they found it harder to cut open the Caltech defense.

This meant La Verne relied on their dribbling skill sets in the final third to make chances happen.

Their passes began to get riskier and riskier looking for the one killer ball to seal the win. There were no more goals to be recorded but the Leopards were still playing confidently and controlled the pace.

Caltech was not able to come into the game whatsoever because of La Verne’s dominance in midfield and attacking.

The defense cleaned up every chance Caltech created so it was a good game for the Leopards as they held the Beavers down.

“It’s our first shutout and win so I feel like this is going to be the start of something good for the rest of our season,” senior goalkeeper Jasmine Valadez said.

The Leopards continue action as they travel to Claremont-Mudd-Scripps at 11 a.m. Saturday.

Stags too much for Leos, drop to 2-3
Music Review: Two dead artists with one new single