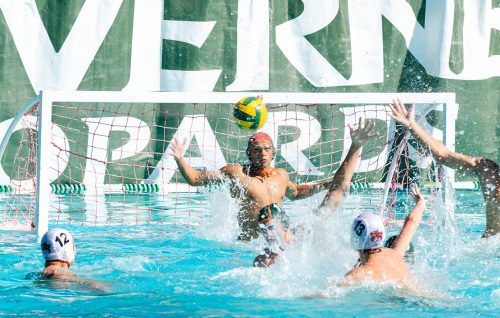 Senior goalie Ian Hernandez jumps to block a shot from Occidental in the last game of the season Saturday. Hernandez, who was honored in a pool-side senior day celebration before the game, finished the season with 174 saves. / photo by Katelyn Keeling

The men’s water polo team played its final match of the season against Occidental but fell short of a happy ending, losing 11-10 to the Tigers.

An unlucky day in front of goal for the Leopards as nearly all of their 36 shots were either deflected wide or saved by the post. Junior utility player Charles Ortega tried to rally the Leopards with his five goals but the Leopards hole was too deep to climb out of.

“We wanted to finish our season out on a high note and today we just couldn’t finish today,” head coach Pat Beemer said. “We had a ton of chances and statistically we out-shot them 2-1, so it’s tough.”

The first quarter was a headache for the Leopards as sophomore attacker Joseph Cox was able to assist all three of the Tigers opening goals while La Verne struggled to respond.

“After the first few goals the demeanor of the whole team kind of diminished,” junior defender Rex Sample said. “Our offense and defense play wasn’t what it should have been and not what it has been in the past.”

Occidental grabbed the first two goals while junior attacker Joey Sabers put the Leopards back within one goal midway through the first quarter.

The Tigers sophomore utility player Elijah Havens canceled out Sabers goal to reestablish their two-goal lead once more before freshman center Jason Soo Hoo brought La Verne back within one with 3:15 to go in the first quarter.

The second quarter established the counter-attack tempo of the game as both teams matched each other’s three goal quarter.

Sample linked up with freshman center Michael Staine got things started for La Verne after the 2:30 mark. Cox got his fourth assist of the day when he set up freshman center Cian Concannon but was canceled out by a Ortega and Sabers one-two counter of their own.

Junior attacker Nicolas Lapri got on the score sheet and sophomore attacker Alex Marriott thought he had sunk the Leopards before halftime but a last second frenzy on the Occidental goal line saw Ortega turn the ball into the net to give the Leopards some hope before the half ended. The Leopards were trailing, 6-5.

Occidental grew wary of the Leopards and frustration set in as the Tigers suffered 10 exclusions throughout the second half. “I think we handled being up a man pretty well but for the most part we didn’t finish our opportunities,” freshman utility player Mitchell Montenegro said.

The Leopards were stunned by Occidental’s aggressiveness in the third quarter. La Verne won the third quarter sprint and got their equalizer with senior attacker Jason Russum setting up Staine for a bullet-like shot into the bottom corner.

The Tigers punished La Verne after conceding the equalizer and scored on their next three consecutive possessions to pull away and establish a comfortable 9-6 lead.

“We had to figure out what spots were open and the angles we should be attacking more and fix up any problems along the way,” junior attacker Evan Monterroso said.

The Leopards fought their way back when freshman attacker Myles Storms, being challenged from behind by two Occidental players and with his back to goal, showed great strength to turn away from both centers and fire a cannon into the top corner to give the Leopards a goal back.

Ortega completed his hat-trick with 1:38 left to play and put the Leopards within reach of an equalizer.

Senior defender Alexander Zim for the Tigers ruined the momentum for the Leopards when his shot from the 6 meter line bounced off the water crossbar and then drifted in to reestablish the their two goal lead.

The fourth quarter had the crowd on the edge of their seats when Ortega tucked home a Sabers cross with 6:47 left to play.

On the ensuing counter-attack, the Leopards were down a man after Sample was excluded from play for an aggressive foul. Occidental’s Cox sunk the Leopards hopes with his fifth assist as Havens grabbed his second goal and put the game to bed.

The Leopards ended the season 3-11 in the Southern California Intercollegiate Athletic Conference and 8-21 overall.