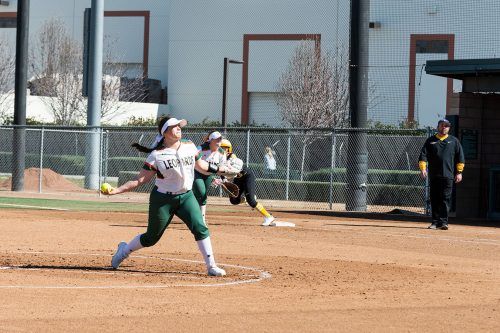 La Verne junior pitcher Katheryn Navarro faces off against Cal Lutheran in the second inning of the first game of Saturday’s doubleheader at Campus West. Cal Lutheran scored four runs in the inning but La Verne won the game, 11-4. / photo by Katelyn Keeling

The Leopards swept the series with scores of 11-4 in the first game and 6-4 in the second.

La Verne came into the series winning three of their last four games to start the season. Junior pitcher Katheryn Navarro picked up the victory in game one.

Senior outfielder Carly Condon reflected on the anticipation of opening up SCIAC play as defending champions.

“There’s definitely a lot riding on our season because we’re coming from three past champions, so there’s a lot on our backs,” Condon said. “Every team wants to beat us, so it’s having the mindset that we’re not going to let them.”

Despite allowing two base runners on first and second with one out on defense, La Verne recorded a ground out and strikeout to gain momentum for the offense in the next inning.

At the top of the third inning, Rojo found herself in another jam, after giving up two walks, a stolen base and an infield single, but she got out of the inning after senior catcher Rachel Barker grounded out to her for the final out.

La Verne started the bottom of the third after Workman hit sophomore first baseman Gabriella Underwood with a pitch and an infield single by senior outfielder Sienna Kendricks, with only one out.

After Workman took a line drive to the calf, the Regals’ infield converted a 5-4-3 double play to end the third inning with the score at 4-0.

Rojo kept her composure in the top of the fourth inning and had herself a clean, 1-2-3 inning.

With La Verne up to bat, the offense took advantage early.

With one out, after a double by Navarro, sacrifice bunt from Condon to third base and a walk by freshman catcher Bailey Grani, Mendoza flew out to center field to end the fourth inning with the 4-0 lead.

Cal Lutheran’s surge on offense sparked during the top of the fifth inning. With no outs, sophomore Danielle Chatman hit a base clearing triple to bring La Verne’s lead down to one, with a score of 4-3 and junior infielder Sienna Vannoy hit a sac fly to right field to tie the game up at 4-4.

In the bottom half of the fifth inning, senior outfielder Rachel Ogata hit a single and stole second base on the next pitch to give La Verne some momentum.

Underwood advanced to first after being hit by a pitch and Kendricks followed up with a sacrifice bunt to advance the runners to second and third base.

Senior catcher Melissa Garcia broke the tie with the clutch two RBI double to give La Verne the 6-4 lead.

Condon grounded into a double play to end the inning.

La Verne silenced Cal Lutheran’s bats at the top of the sixth inning without allowing a base-runner but the Regals were also able to complete the shutout in the sixth.

Rojo sealed the game after striking out Barker for the final out to give La Verne the victory, 6-4.

Interim head coach Henry Moranchel says that maintaining momentum with consistent play with improvements from last season are what is needed to excel the rest of conference play.

“The keys are going to be keeping it clean and playing good softball,” Moranchel said. “Last year in my opinion, we had too many errors, so this year, we worked hard on our defense and we made sure we want to not be on the same level defensively as last year.”

Garcia emphasized the importance of bonding as a team on and off the field, taking into consideration the three-peat run the past few years.

“We have a lot of weight on our shoulders after this three-peat and I knew that we need to come in strong and not let anyone attack us any harder than we can take,” Garcia said. “I think we need to keep bonding and get stronger as a team and form better chemistry on the field and it’ll only go from there.”

La Verne will continue SCIAC play with a doubleheader against Redlands starting at noon Saturday at Campus West.