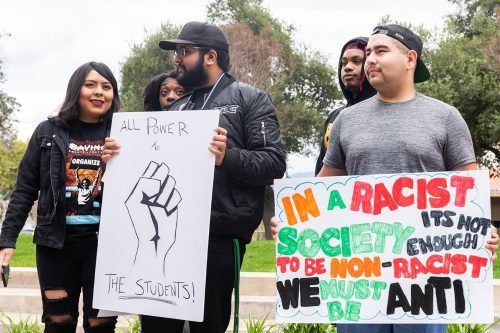 Decolonize ULV, a student group rallying to give a voice to students with diversity and inclusivity concerns, called for University administrators to commit to mandatory diversity training, a full audit of general education curriculum and the maintenance and expansion of cultural affinity alumni networks Wednesday in Sneaky Park.

Approximately 15 students gathered beside an open mic as seven of these students took turns listing the group’s demands and shared their experiences with racism and microaggressions on campus.

An audience of approximately 30 people gathered to hear the list of demands.

DCULV developed these demands as a result of microaggressions and retaliation experienced by students on campus, Marchbanks-Owens said.

“My freshman and sophomore year, the president used to try to touch my hair, and when I would tell her no she would laugh it off,” Marchbanks-Owens said. “This problem that we’re talking about is not just at a presidential level; most of the PEC, which is the president’s executive committee, ignore all of the students up here. When we’re on campus and [they] walk past us, they will come up to us, talk to the people we are with and blatantly ignore us.”

Marchbanks-Owens called for accountability with reference to instances in which she said faculty or staff undermined or ignored her as a result of demands made by DCULV.

“Our art curator Dion Johnson, in a meeting with students and staff, told students that culturally representative art is a dumbed down version of art,” Marchbanks-Owens said. “This person is still our art curator.”

Other students expressed frustration for the manner in which President Devorah Lieberman addressed DCULV members’ grievances.

“She sent me a personal written letter apologizing for all the comments she has made towards me and my partner, but I don’t see her here,” said Anayeli Dominguez, graduate student of social justice in higher education. “To me actions speak louder than written words.”

“If students are going up to her and saying ‘Hey you know, this is bothering us,’ and she just sends me a handwritten letter; she doesn’t even say ‘Hey can I speak to you, come into my office so we can have a real human interaction where I can apologize’,” she said. “To me, that says a lot.”

Marchbanks-Owens acknowledged the efforts administration has made so far to meet demands, but said there is much more that needs to happen.

“We’re here to say that, yes, the university has addressed some of the issues that we have brought up, but none of the issues that they have addressed are sustainable,” Marchbanks-Owens said. “They’re bringing speakers to campus that aren’t engaging with the campus community. They’re bringing speakers to campus that don’t currently know what’s going on on campus. We’re asking for sustainable changes here, not a two-year change.”

“I think where we’re running into a problem, is that the senate is not on board with what we’ve asked,” she said. “We asked for cultural competency to be a part of the tenure process, which has been a topic of conversation that has been repeatedly shut down.”

After the protest disbanded, Marchbanks-Owens, Rodriguez and senior history major Paril Patel led DCULV to a faculty strategic planning session, hoping to voice their concerns with reference to plans for the University’s future.

“I think I’d be remiss if i didn’t acknowledge that the students have come over from the protest. They are clearly pointing out that this is an area inclusive environment and that we have work to do, and [have been] reminding us that for the past several months,” Reed said. “I think it’s important for us to acknowledge that if we’ve created a place with toxic stress of feeling like you don’t belong or aren’t accepted, that the learning doesn’t happen at the level that it needs to happen.”

“We want to make sure that the demands that we as students are asking for are on here because I can say as someone who is about to graduate, that I have no interest in giving back to this institution,” she said. “And if you guys keep serving the students who have already graduated here, I don’t know how your jobs are going to be in about 10 years when we all graduate and we’re not giving back to this institution because of the way we’ve been treated.”