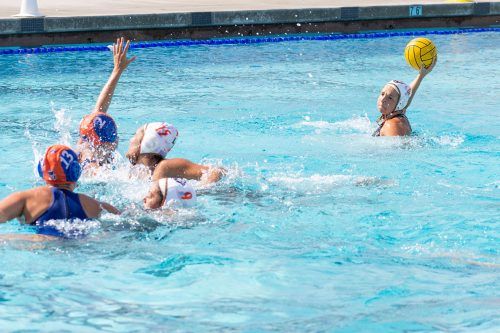 Freshman center Alicia Thompson throws the ball toward the Pomona-Pitzer goal Saturday at Haldeman Pool. The Sagehens beat the Leopards 8-6. The Leopards will play the Athenas at Claremont-Mudd-Scripps at 11 a.m. Saturday. / photo by Kayla Salas

The Leopards went on the road to Haldeman Pool in Claremont Saturday to take on the Southern California Intercollegiate Athletic Conference leaders, Pomona-Pitzer, but came up just short, dropping the game to the Sagehens, 8-6.

With the loss, the Leopards drop to 6-4 in SCIAC and 8-12 overall, still holding fourth place in the conference ahead of Claremont-Mudd-Scripps (5-4).

Although the Sagehens are the top seeded team in the conference, their game against La Verne would be their second of the day – their first being at Whittier where they narrowly won 14-13.

The Leopards looked to take advantage of the tired home team.

The game started well for the Leopards, with senior attacker Guarina Garcia drawing first blood only 30 seconds into the quarter to take the lead.

However, the Sagehens would go on a four goal run to take the 4-1 leading heading into the second quarter.

La Verne’s turnovers proved to be costly, as nearly all of Pomona-Pitzer’s goals in the first quarter were scored off of La Verne mistakes.

“Pomona’s very good, we know this, and they press so heavy and strangely never get called for it, so we had to make the adjustment,” head coach Pat Beemer said.

The Leopards managed to fix many of their issues plaguing them in the first quarter and scored two unanswered goals by junior center Ilene Guerrero and Garcia to make the score 4-3, Pomona-Pitzer.

The two goals were scored during power-plays, with the Leopards taking full advantage during their 6-on-5 scoring opportunities.

Junior goalkeeper Shelby Garcia proved to be extremely valuable for the Leopards during their comeback, consistently denying Sagehen goals that allowed her team to come back.

Though with just over one minute left in the half, the Sagehens managed to answer back with a goal.

But that goal was quickly replied with just five seconds left by Guarina Garcia who completed her hat trick and cut the deficit to just one point heading into the half, 5-4, Pomona-Pitzer.

“The second quarter was great for us because we cleaned up a lot of the mistakes (from the first quarter) and one of the things we told the kids is that they’re going to press heavy,” Beemer said. “The natural response is to put your face in the water but that turns into a turnover. Kept our faces up and good things happened.”

Coming into the second half, the Sagehens would score just 30 seconds into the quarter off of a Leopard defensive miscommunication.

However, despite their fatigue, the Sagehen defense also came to play and made scoring very difficult for the Leopards, as La Verne was able to set up plays around the cage, but few led to goals.

The attempted scoring plays would backfire on the Leopards with the Sagehens always rushing back on the counterattack faster.

Luckily Shelby Garcia had a standout day in the cage, racking up a total of nine saves, many of which came during Pomona’s counterattacks.

With the score 6-4 and the quarter coming to a close, Guarina Garcia broke free off of a pass from sophomore attacker Jasmine Kezman and took the ball up the middle for the score, again at a one point deficit heading into the last quarter, 6-5.

In the fourth quarter, Guarina Garcia would once again step up for the Leopards, scoring off of a nice setup around the cage to tie the game 6-6 early in the quarter.

Unfortunately the Sagehens would quickly answer back to regain the lead.

With 30 seconds left of regulation the Leopards were looking for the score to tie, but a Leopard turnover inside the Sagehen five-meter lead to a counterattack that the Sagehens scored on, ending the game, 8-6.

“There’s only so much you can talk about until you actually get the experience, now the kids have experienced it,” Beemer said. “I hope we’re fortunate to make it into the (SCIAC) tournament and if so I hope we play them because I don’t think that will happen twice.”

The team would bounce back in their game Wednesday against Caltech at home, where they dismantled the Beavers 12-6 and now improve to 7-4 in SCIAC.

The Leopards now look to take on Athenas in a battle for third place as they take on Claremont-Mudd-Scripps on the road at 11 a.m. Saturday.