By David Gonzalez, Kayla Salas on September 7, 2018 in LV Life 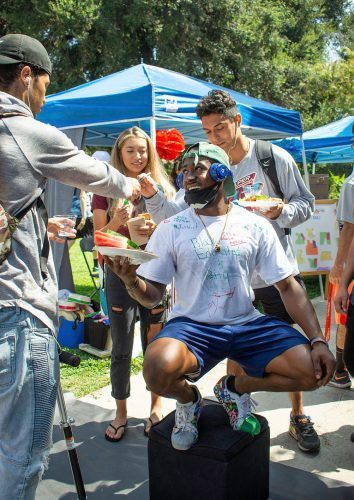 DaeJohn Logan, senior psychology major, squats over a pedestal while students sign his shirt during the club fair Wednesday. He said he wanted to give people a platform to be heard as well as to make people interact during the event. / photo by Kayla Salas

The University of La Verne’s fall semester club fair hosted 60 clubs Wednesday in Sneaky Park. Clubs were asked to decorate booths based on different fashion brands that fit the core message of their club.

The club fair is the place to learn where you belong on campus.

“When you first go to college you kind of have a clean slate,” said Jennifer Gonzalez, junior theater major. “You don’t really know what you want to do or how you want to do it.”

Gonzalez is in the Cabaret Student Productions, which focuses on giving students a platform to showcase their art in a free and safe environment.

Gonzalez said that clubs on campus are a great place to discover something new that could become a passion or find a new way to do something familiar.

Among the clubs present was the Common Ground club.

Damairis Lao, senior art and art history major, said the club seeks to find dialogue in areas of difference and to help people deepen their knowledge of themselves.

“It’s really a place for you to develop your leadership skills, your social skills, or whatever you’re looking for,” Lao said.

She said that the song talks about being inclusive of different people.

Yulvi Reyes, sophomore Spanish major, is the president of the Multicultural Club.

Reyes said that the club encourages diversity and collaboration between clubs.

“We are trying to have a round table with other clubs, so we can come together and speak about issues that we have,” Reyes said.

Reyes said that it is important for people to join different clubs to learn about their capabilities.

The fashion brand that the Multicultural Club chose was Intersectional Revolution.

Reyes said that the shirt they sell is simple but provides a good message that is similar to the message of the club.

While students maneuvered their ways to different clubs, LeoFM provided musical entertainment and giveaways, including four tickets to the Los Angeles County Fair.

Students were also provided with lunch so they can sit and mingle over a meal.

Olivia Troud, freshman criminology major, said she enjoyed her time at the fair, noting that it was interesting to see all the clubs La Verne has to offer.

“I signed up for Cabaret because I do special effects makeup, so I wanted to help with the haunted house,” Troud said.

Troud said that it was important to get involved to meet people and not just sit in her room alone.

Many other clubs also emphasized the importance of getting involved on campus.

The Botany and Gardening Club and First Generation Club were also at the Club Fair.