By Ariel Torres, Joey Matsuzawa on November 22, 2019 in Basketball, Sports 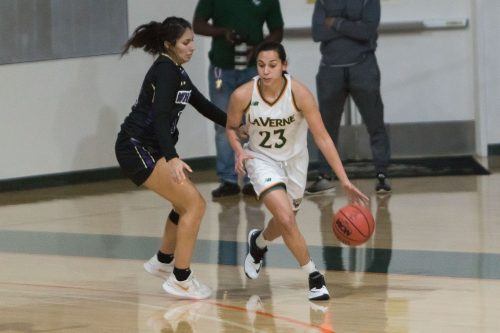 After a slow opening for both teams, the Poets began to separate themselves from the Leopards, with the latter unable to hit their shots.

The Leopards would have many early opportunities but simply could not make much of these chances.

The Poets got out to an early 18-6 lead at the end of the first quarter thanks to the guard duo of junior Teani White and senior Cali Cubel, who notched a combined eight points and four assists in the first.

Leopard sophomore guard Jazzlyn Johnson was one of the few bright spots for the Leopards offense, constantly powering her way through the paint for layup after layup.

But things would get worse for the Leopards coming into the second quarter, as they were unable to slow down Whittier’s shooters.

Luckily for the Leopards, junior forward Jasmine Xiong managed to shoot her team back in the game, sinking multiple jump shots to bring the Leopards closer, 22-16.

“We were more disappointed [being down] than anything. Everyone took it personally,” Xiong said. “I think after halftime, we all knew we were better than that and it helped motivate us to pick it up later in the game.”

But the home team’s offensive woes came back to haunt them as they missed rebound after rebound, allowing the Poets to take a 32-16 lead to the half.

In the third quarter, while they put more points on the board, the Leopards were still unable to slow the Poets down on defense, letting White and Cubel dominate any time they were on the court.

But as the Leopards began to rebound, it breathed new life into the team and brought the score to 64-49 to end the third after Leopard junior forward Alondra Ponce scored five points in a row.

Ponce then nailed a layup to open the final quarter that put the home crowd on its feet.

And just like that, after a few more scores, the Leopards were back in the game, 64-58.

It soon became apparent that the Leopards were firmly in the driver’s seat with all the momentum as the Poets’ offense began to stall.

“We play a lot of people in the beginning to wear teams down,” said head coach Jason Pruitt. “I looked at some of their players and saw they were tired. They hit a wall and we took advantage.”

After another Johnson layup, senior forward Destinee Garcia made two clutch free throws to finally draw even at 64 with only five minutes left in the game.

Garcia then made another clutch play, stealing the ball and sinking her jump shot to take the Leopards’ first lead of the night.

The Leopards’ shooters began to heat up, applying pressure to the Poets and took a commanding 74-64 lead.

The Poets had allowed 35 unanswered points and had yet to find the basket in the quarter.

Finally, Whittier sophomore forward Shaeleigh Wright made a layup with just over a minute on the clock get break the Poet’s nine minute scoring drought.

“We wanted to make it harder for them to get to the basket and not give them anything,” Johnson said.

Johnson had a career night for herself, recording 31 points, eight rebounds and an assist. The sophomore went 10-of-19, 3-of-6 in 3-point shots and 8-of-10 in free throws.

“I was just happy I was able to do my part for my team. Not too much but just enough to help us get the win,” Johnson said.

The junior has put up double digit scores in three of the Leopards’ four games this season.

As a young team, with the starting lineup mostly comprised of juniors, the players feel that they have made strides in building their teamwork and chemistry.

“We’re still trying to get to know each other and figure out how we all play but I think we’re doing a lot better job of it now,” Garcia said.

The Leopards will host Pacific Union at 4 p.m. Friday and then Bethesda University at 4 p.m. Saturday.