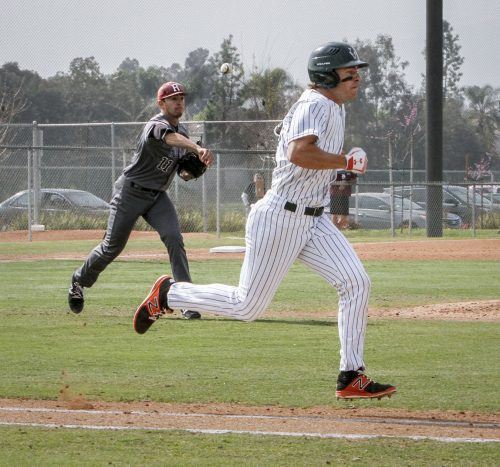 La Verne junior outfielder Brandon Vogel races to first base as Redlands senior pitcher Felix Minjarez throws him out, ending the third inning Friday at Ben Hines Field. The Leopards would go on to win on a walk-off in the tenth inning, 7-6, after a fielding error by Redlands. / photo by Ashlyn Hulin

The La Verne baseball team walked it off in 11 innings against No. 15 Redlands Friday night at Ben Hines Field, 7-6.

With the win, the Leopards move to 10-3 in Southern California Intercollegiate Athletic Conference play and 19-10 overall.

“That was a really emotional game,” head coach Scott Winterburn said. “It seemed like we had control of the game, but ultimately we did one more thing than they did.”

Redlands got on the board first in the top of the third inning. Arcos gave up a bunt single, followed by a triple, giving the Bulldogs an early 1-0 lead.

The Leopards answered back in the bottom of the fourth. Senior designated hitter Jakob Thomas was on board after getting hit by a pitch and later advanced to second on a wild pitch. Senior first baseman Nicholas Michaels singled, advancing Thomas to third.

Junior left fielder Christopher Ligot came up with one out and laid down a bunt for a base hit that scored Thomas to tie the game 1-1.

In the bottom of the fifth, Michaels hit a two-out three-run home run to right field to give La Verne a 4-1 lead.

“I was just looking for a mistake,” Michaels said. “It was a fastball up and away and I put a good swing on it.”

After allowing that first run, Arcos managed to settle in and kept putting up zeros for La Verne, as he commanded his pitches, keeping Redlands off balance. The offense brought him another run in the bottom of the seventh inning, as junior shortstop Jacob Benson scored on a wild pitch.

The Leopards were in control of the game until the eighth inning. After the first two hitters for Redlands reached, junior Hayden Firth came in for Arcos. After a single, passed ball and a double, Redlands tied the game 5-5. Junior right fielder and pitcher Christopher Peres replaced Firth to get the Leopards out of the inning.

“He’s a really good player,” Thomas said. “He’s very good on the mound and at the plate and it’s nice to have someone like that late in games.”

The game headed into extra-innings. Redlands brought in a run, after hitting a triple, and a double with two outs, to take a 6-5 lead.

The Leopards quickly answered right back, as Michaels hit a deep double to center field. Peres hit a grounder to the right side for the force out at first. Then a wild pitch brought the runner home to tie the game, 6-6.

Peres continued his dominance on the mound, with a 1-2-3 top of the eleventh inning.

Senior catcher Andy Martinez started the inning off for the Leopards with a single to left and was replaced by pinch runner junior Eric Munsey. Junior third baseman Rudy Cesarez III followed with a bunt single.

Benson moved the runners over with a sacrifice bunt, and Vogel was intentionally walked to load the bases, bringing up sophomore infielder Aaron Fong.

Fong hit a chopper to third and the Redlands third baseman could not securely get a hold of the ball, as Munsey made his home to win the game for La Verne.

“It was a good team win today,” Fong said. “Coach told us that’s baseball, you just need to put the ball in play and that’s sometimes what happens.”

The Leopards are back in action at 11 a.m. Friday at Pomona-Pitzer. They return home Saturday for a doubleheader against the Sagehens beginning at 11 a.m.