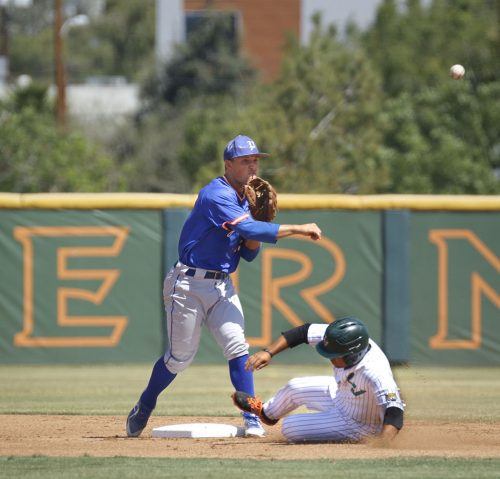 Christopher Ligot, La Verne junior left fielder, slides into an out at second base during a double play started by Pomona-Pitzer freshman second baseman Hunter Hennigh in the bottom of the first inning of game one Saturday at Ben Hines Field. The Leopards took the first game, 8-0, and the second, 14-4. La Verne is now 23-11 overall and 14-4 in SCIAC play. / photo by Tyler Evains

Sophomore pitcher Cody Norman and the Leopards’ offense carried La Verne to a 8-0 win against Pomona-Pitzer in game one of Saturday’s doubleheader at Ben Hines Field.

The Leopards moved to 23-11 overall and 14-4 in conference play. The Leopards have yet to lose a conference series, and trail Redlands by two games, having played one less series than the Bulldogs.

“If our pitching is staying healthy and doing their job, our offense picks us up,” assistant coach Sean Fasig said. “Every game is a tough game and important from here on out.”

Norman was big for the Leopards, throwing eight innings while only giving up three hits. In his last two games, Norman has not allowed a run and struck out 18 batters.

“The game plan was to get ahead and attack,” Norman said. “Not let them determine what was going to happen and make sure I throw strikes.”

Norman said he did not have his best stuff, but he battled through and gave the La Verne eight solid innings.

La Verne’s offense got an early run for Norman in the bottom of the first inning.

Junior right fielder Chris Peres came up and singled through the right side of the infield to score Michaels and give the Leopards a 1-0 lead.

Norman kept plugging along, in the early innings he was efficient with his pitches and mixed them up to keep the Sagehens’ hitter off-balance.

“He did not have his best stuff but what helped him was the location of his pitches,” sophomore catcher Adam Santa Cruz said. “That’s great to have a pitcher that can battle when he doesn’t have his best.”

The offense kept producing for Norman. In the third inning they were able to get two more runs across with two outs.

Michaels drew a walk and advanced to second off a wild pitch, and Peres brought him in with a double down the right field line. Junior center fielder Brandon Vogel singled to third base to bring in Peres and give the Leopards a 3-0 lead.

“When we can score runs and get quality innings from our pitchers, that’s how La Verne baseball is played,” senior designated hitter Jakob Thomas said.

La Verne added another run in the sixth, and four in the seventh to take a commanding 8-0 lead over Pomona-Pitzer.

In a scary moment in the bottom of the seventh inning, Thomas was hit in his helmet with a pitch on a full count.

Thomas immediately went to the ground, but after about a minute was able to walk to the dugout under his own power.

“It was 3-2, probably could have gotten out of the way but I picked it up a little late,” Thomas said.

Thomas was replaced by junior Ryan Aguilar. Michaels got Aguilar to second with a sacrifice bunt and Peres brought in another run with a single to left, making it 5-0.

Vogel came up and singled. Peres scored off a fielding error and Vogel took second on the error. Santa Cruz scored Vogel on a single to left field, and the Leopards busted the game wide open.

Senior second baseman Mauricio Guadarrama plated Ryan Galan, pinch runner for Santa Cruz, with a single through the right side and after seven innings, La Verne had a comfortable eight-run advantage.

Sophomore pitcher Travis Moffatt came in and got the final three outs of the game and sealed the win for the Leopards.

La Verne will continue SCIAC play against Chapman at 3 p.m. Friday at home before going on the road at 11 a.m. Saturday at Chapman for a doubleheader.