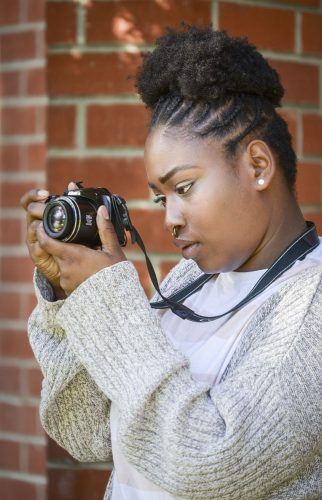 Jedaun Carter, senior psychology major, is the face behind the photography brand CreatiVisionarieZ. Carter, who has always been interested in photography, only recently became a photographer to highlight the beauty of women of color. As a psychology major, Carter said she believes that she understands her models, their confidence and insecurities and that insight helps her to photograph them. / photo by Audrey Gaudette

In between psychology classes and her work at the Interfaith Chapel, senior Jedaun Carter also finds the time to try to reframe the world through her camera lens.

With the crossover of her artistic interest and a passion for social justice, the mostly self-taught University of La Verne student has launched her own brand, CreatiVisionarieZ, with hopes of tearing down beauty standards and taking a stand against societal norms.

“I think words mean a lot and they say a lot, and they definitely get your point across, but seeing a picture is different from hearing about it,” Carter said. “You can’t lie about the emotion you see in a picture. If someone is showing emotion, they’re showing emotion. I think photography is a good way to put it in people’s face.”

Carter said she has always been interested in photography, but it was after her freshman year when she got a camera for a FLEX photography class that she undertook it as a hobby. She learned the different techniques, but took it upon herself to research and initiate her endeavors in the field.

“Some of my friends have been my models and I’ve just been playing around with photography until I got to the point where I felt comfortable enough to share my photography with the world,” Carter said.

She launched CreatiVisionarieZ in September, with the mission of dismantling stereotypes and showing the true face of issues such as mental illness, racism and sexual violence.

“I’ve always wanted to be my own boss, so starting the brand meant I could share my pictures and my art the way I want to and no one has regulations or control over that,” she said.

The inspiration behind it, Carter said, came from personal experiences as well as a dissatisfaction with how some groups of people are either misrepresented or not represented at all.

“Growing up there was not a lot of representation of people that look like me or people that were dealing with issues like me,” Carter said. “Being told that your hair is not long enough or your hair doesn’t look like this, or your body is not small enough… that you can’t wear your hair a certain way, or you can’t wear these clothes because it entices men, and just being told these stupid things growing up is really what pushed me towards doing a brand like this.”

Especially at the local level, with ULV students as the main participants of her photoshoots, Carter hopes to convince even the most skeptical that they have unique beauty that is worth sharing.

“I’ve met a lot of people that want to do modeling and want to do a lot of things but can’t because they don’t fit into the standard of beauty that our society has deemed everyone into,” she said. “My stance is to tear down the universal beauty standards and create a new standard that says everyone is beautiful.”

One of those students is sophomore political philosophy major Kacee Jones, who was approached by Carter one day at Davenport Dining Hall and asked if she wanted to participate in a photoshoot.

Dressed in pastel colors and embraced by the settings of Hanawalt House and the roof of the parking structure, Jones said she felt like a natural despite it being her first time modeling.

“I don’t ever get in front of a camera, and it seems like a really unnatural thing to me, but Jedaun is so warm,” Jones said. “She really just made it feel really comfortable and natural, and by the end of if I felt like I had been doing that my whole life.”

She added that Carter’s style is a good mix of giving directions and allowing creative freedom; she would often let Jones and fellow model Anna Roberts take their own course and just follow it.

Another student who modeled for Carter was junior community health major and Spanish minor Genesis Hampton. Also a débutante in modeling, Hampton blended in with graffiti walls and different settings in and around Pitzer College as the sun went down, during her first photoshoot with Carter.

“She definitely encourages you and makes you feel like this is something you can do even if it’s not usually your thing or you’re not trying out for modeling agencies,” Hampton said. “It definitely made me want to do more of it, and made me feel confident as a black woman.”

University Chaplain Zandra Wagoner said she began to really get to know Carter during the University’s diversity retreat about two years ago. She described Carter as intentional and thoughtful.

“If you were to create a fair and equitable society, I think she knows what that means and what it takes to get there, and the kind of commitment it takes to create equity,” Wagoner said. “She’s very good at looking at a situation that’s challenging, and with time, she can reframe it and figure out how to address something.”

Wagoner added that Carter’s commitment to social justice is one of her biggest strengths.

“I think for her personally, that is really finding ways to empower African-American women,” she said. “She wants to be involved with creating an inclusive environment that crosses gender, race, religion and sexual identity- all of those are really important for her.”

Carter said that she wants to eventually break off into political photography to bring awareness to political issues such as sex trafficking, sexual violence and racism that are heightened at the moment.

Her other future goals include working with people outside of California and eventually turning CreatiVisionarieZ into a for-profit organization, to hire more photographers, social media managers and makeup artists who do not conform to society’s standards.

“I want to have a whole team of people, but I want do a for-profit organization and not non-profit because I want to be able to pay them to do the things that they love,” Carter said. “Not only me because I’m doing photography and getting paid to do something I love. I want other people to be paid to do something that they love, so that eventually there’s enough of us that we can take over society’s brand of what everyone is supposed to be.”

Those who know her attest to Carter’s tenacity and perseverance, and believe she has what it takes to turn that dream into a reality.

“As I’ve watched her put together her business, her brand, I’ve learned that Jedaun is incredibly resourceful, innovative, entrepreneurial and creative,” Wagoner said. “When I look at her photos, what I see is she’s portraying strong and deep images of African-American women and it’s beautiful.”

Her models have also shown they trust and support her message, and have faith in the work Carter does.

“I love it, I’m all for it, especially within the black community for women, beauty standards are so hard to meet,” Hampton said. “They’re not made for us, they’re usually Euro-centric, so for an artist like her to come along and want to speak about it, to want to represent something that’s not being represented, I think it’s amazing. It should be definitely noticed.”

Jones said that to her, one of the best parts about Carter’s initiative is to show that change begins at the local level, in this case through La Verne students to personalize the mission.

“I think it’s really in, especially in a local setting where I can see La Verne students on it,” she said. “Because it’s not just like de-standardizing beauty everywhere, you can see it in your own peers, in your own student population.”

Despite discovering modeling only through Carter’s ambitious visions and liberating clicks, some models have found in her point of view an extra dose of confidence to be who they are.

“I don’t think I would continue modeling per se, but I would love to work with her again because she doesn’t make it feel like modeling,” Jones said. “She just makes it feel like I can just be myself and she’s going to take some photos.”