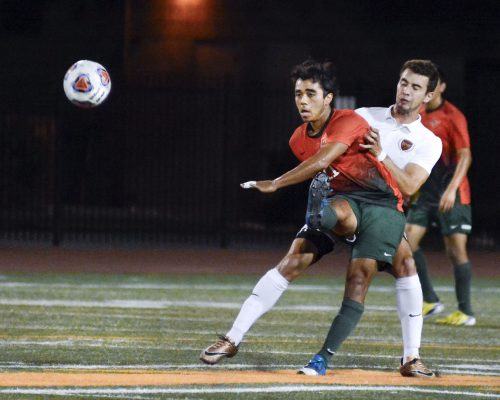 Senior midfielder Javier Jasso intercepts a Bearcat pass during the second half of the men’s soccer game against Willamette. The Leopards lacerated the Bearcats, 3-0, Monday night at Ortmayer Stadium. This was La Verne’s last friendly game before conference play. / photo by Dorothy Gartsman

After a scoreless first half, the men’s soccer team managed a 3-0 win with two late goals against Willamette Monday night at Ortmayer Stadium in the last game before conference play starts.

The 1-0, scored by freshman forward and midfielder Johnny DeRueda on the 61st minute, came to reward La Verne’s growing momentum that started before the halftime whistle and was sustained going into the second half.

“We started off kind of slow but we got into it, and we really finished it off pretty good,” DeRueda said.

The goal that broke the game open was the freshman’s first since his arrival.

“It was a filtered ball by Luis Hernandez, the keeper hesitated to come out, put it off to the side and finished it. Bottom right corner. It feels good – many more to come, though,” DeRueda said.

Throughout the initial 45 minutes, the Bearcats accumulated six shots and three of them on goal, against the Leopards’ two and one on goal.

With more possession and control, Willamette was able to dictate the game’s pace while La Verne sought to absorb the pressure and infiltrate the opponent’s side of the field.

Although initially superior, the visiting team did not translate that into aggressiveness or goals.

Only toward the final 15 minutes the game started to heat up, with the Leopards beginning to find their groove, taking more initiative and alternating clear goal chances with Willamette.

In the second half, La Verne was more effective in its offensive efforts, building from the back and not allowing the game to go the visitor’s way again.

At the final whistle, the home team had nine total shots with six on goal while the Bearcats had 11, five on goal.

Close to the end, the Leopards netted two more to seal a convincing victory built gradually.

From the penalty spot, sophomore forward Christopher Wong made it 2-0 at the 83rd minute when a Willamette defender stopped La Verne’s counter-attack with a handball.

Less than a minute later, freshman midfielder Luis Hernandez finished a cross by DeRueda to find the back of the net and give the game its final numbers.

“I thought we (defense) kept it solid and we kept a clean sheet, which is always good,” freshman goalkeeper Tristan Polakowski said. “Took us a little while to get the offense going, but defense was solid.”

Following three friendly games in preparation for the season, La Verne started conference play on Wednesday with a 1-0 defeat against Claremont-Mudd-Scripps.

After 10 seniors graduated from last season’s squad — most of them starters — Persson is trying to use the balance between the young and the more experienced to rebuild the team.

“It’s been fun but challenging. We have really young, but athletic and driven players coming in, 15 new faces with 15 returners,” Persson said.

“It has been tough for the first two weeks, but it has been exciting because they bring in a different style of play than what we had last season. They bring in versatility in positions we did not have.”

In addition to leaning on the strong leadership of returning players as one of the team’s main assets, Persson seeks to capitalize on the youngster’s qualities to shape the new group’s playing style.

“I think we have a team that will be better with possession, but we also have a team that is very quick and fast so we want to be able to utilize our speed to break other teams down,” he said.

“With the new group of guys that we got, we are playing a lot more direct and we are working our way up through the ground as much as possible,” he said. “Starting from the back, working our way inside, and then working our way out to the outside mids.”

Estrada said he considers his experience a leadership opportunity, not an added element of pressure.

The Leopards take the field again 7:30 p.m. Saturday against the Whittier Poets at Ortmayer Stadium. Next, they face the Chapman Panthers on Wednesday night, also at home.