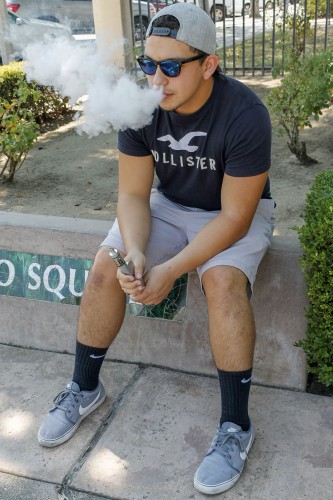 Sophomore business administration major Christian Monterroza enjoys an afternoon vape in Mainiero Square with a banana and strawberry flavored e-juice called “Smooth Curves” by Stimulus. Monterroza was an occasional smoker and wanted to try vaping as an alternative. He started vaping about nine months ago after friends introduced him to it. / photo by Emily Lau

“I enjoyed the feeling of smoking, so I used vaping as a method to stop using cigarettes,” Bailon said.

Vapes are a type of e-cigarette that use batteries as their heat source to produce vapor when inhaled.

Cigarrettes use a burning flame leading to combustion of the chemicals within it.

While facts are unknown, this method of inhalation is thought of as a healthier alternative to traditional smoking.

Most of the liquids used in portable vaporizers contain only a few ingredients such as vegetable glycerin and glycol.

While some use the alternative as a way to end an unhealthy addiction, many young adults who have had no history of smoking began using vapes recently.

“It is a gateway cigarette,” sophomore history major John Bowman said. “I have seen it introduce smoking to people that didn’t smoke before.”

Unlike cigarettes, vapes come in various flavors and scents. Flavors vary from cinnamon and chocolate to strawberry and cotton candy. Without the traditional tobacco smell, the vaping experience is even less like smoking.

“I like fruity flavors,” Bailon said. “The people around me aren’t as offended by the smell either.”

With a less harsh smell and taste, vaping is not as noticeable as smoking.

The vapor emitted from heating up the flavored e-liquid is not identifiable by scent the way the burning of a cigarette is.

“It is a lot easier to do and get away with,” junior theater major Steven Forns said. “It is more convenient and doesn’t smell as bad.”

La Verne’s smoking rules apply to vaporizers the same way that they apply to cigarettes.

According to Lester, students may store vapes in their dorm room, but they must only use them in the designated smoking areas.

The most common smoking areas for residents are located in Lot C lot near Vista La Verne and Lot H near The Oaks.

“We are following California laws because they contain nicotine and chemicals that can potentially be harmful when ingested,” Lester said. “We have to think of the overall community.”

The food and drug administration has not yet approved the use of vaporizers, so while they are seen as a healthy alternative, long-term risks are not yet known.

One Response to ‘Vapes’ blow out cigarettes’ fire­