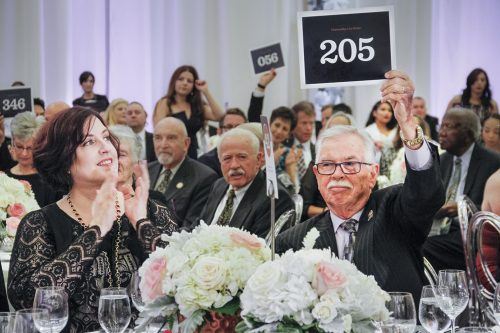 Tony Revier, a member of the College of Business and Public Management’s advisory board and president of the manufacturing company Uyemura, is among those pledging a $1,000 donation at the Scholarship Gala Saturday. Diane Boydell, senior accountant of Uyemura, applauds his pledge. More than 500 guests gathered at the Sheraton Fairplex Conference Center for the fundraising event. / photo by Ashlyn Hulin

Donations from Trustees, alumni, students and other supporters of the University helped raise $907,000 at the annual Scholarship Gala, Saturday in the Sheraton Fairplex conference hall.

The night kicked off with a reception where select students, and guests mingled and snacked on hors d’oeuvres.

“I hope everyone gets an opportunity to … meet some the hard-working students tonight,” said Trustees Wendy Lau. “The students here are a great example of the University’s mission.”

The reception hall was decorated with large black, silver and gold balloons, a propped-up backdrop for photo opportunities and tall, thin tables with small glass boxes and white roses for centerpieces.

At the center of the reception hall was a table filled with items for the Gala’s silent auction.

Some of the items included diamond earrings, a basketball signed by the Sacramento Kings, a baseball glove signed the Los Angeles Angels, dinner for two with President Devorah Lieberman, lunch for two with mayor of La Verne, Don Kendrick, and a condo package in New York.

Bidding started at $500 for each item.

Next to the silent auction table was the 2017 Toyota Prius being raffled off at $100 a ticket.

After an hour of mingling, everyone made their way into the ballroom for the main event.

Lieberman walked around the ballroom to thank supporters and donors in the dinner hall before the Gala began.

“This annual event is called the Scholarship Gala because it is all about the students,” Lieberman said.

“Nothing is more important than the students and it is our job to provide a fair, accessible and affordable education for everyone.”

The main event began with a welcome from Vice President of University Advancement Sherri Mylott, a performance from the ULV Chamber Choir and remarks from President Lieberman.

After the president’s remarks, the emcee explained the live donation part of the event.

When a specific donation amount was announced, donors raised their paddles to signal their intent to donate.

Upland resident Kaitlyn Lally donated $10,000 on behalf of her father, James Lally, who serves on the Board of Trustees.

Dinner was served immediately after and was accompanied by a live performance by a small jazz trio, which included professor of music Reed Gratz.

After dinner, President Lieberman took center stage to introduce and recognize four diverse students who are currently receiving an education at La Verne solely from scholarships.

A video played on two large screens placed on each side of the ballroom that shared their experiences and journeys on how they got to ULV.

“It was incredibly humbling and affirming of the hard work that I have put in during my time here at La Verne to have been honored,” junior history major and student athlete Jordan Hardwell said.

“I really hope that my story and my experiences will get donors to continue to donate, as well as convince new donors to give other students who attend La Verne after I’m done the same opportunities as I received to succeed.”

Lieberman also took this time to introduce the new campaign the University has been working on for the past three years.

“The campaign is called ‘Create the Future’ because you all have a hand in creating our future,” Lieberman said.

She also said since the launch of the campaign in 2015, the University has received 25,000 gifts from individuals and organizations from around the world.

The University has raised $82 million as of Saturday towards their $125 million goal.

After the video, Lieberman gave her closing thank yous and remarks and invited everyone into the reception hall for a dance.

“The event was spectacular and I got to meet some amazing students tonight,” Chairman of the Board of Trustees Luis Faura said.

“I donated because I wanted to keep my commitment to the students of the school and ensuring I help them succeed anyway I can.”