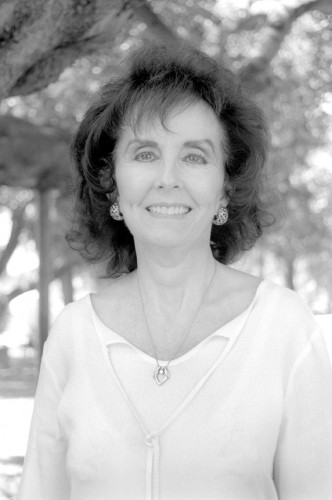 Linda Bearman, administrative assistant in the Registrar’s Office, has been a part of the ULV community for 12 years. Bearman keeps an active voice at ULV through writing letters to the editor of the Campus Times and also by communicating with students and her fellow staff members. Bearman says that it is her diverse family and her travels that help her gain perspective on other lifestyles and cultures. “Americans tend to be loud and boisterous. They are all about themselves. They need to get out of America, see other countries and get an international perspective. We can’t think we have everything and that everything is perfect,” she said. / photo by Jennifer Contreras

Her father lost his ability to hear in World War II. Her uncle died in the same war.

This closeness to the effects of war and conflict served to feed an attitude about patriotism that thrives strongly still.

“My father never complained that he couldn’t hear. He never spoke about his war experiences like many people do. He came back and took care of his family. We had a good life,” says Linda Bearman, administrative assistant in the Registrar’s Office.

Growing up in what she calls a traditional family, Bearman says that she was brought up to be fully aware of the history of America, to be proud of being American and to not take her freedoms for granted.

She remembers her father coming home from the war and feeling absolute adoration for him.

These values were instilled into her heart and are values she feels have diminished in today’s world.

“This generation of college students did not have parents that were in World War II, so how can we expect them to draw in those experiences?

“With Vietnam, it was a very negative war, so that is how they feel about war. It is unfair. They never saw this nation go to war to protect their freedoms,” said Bearman.

Bearman’s beliefs on the values of America and what it means to be patriotic came to a central point in her life when the attacks on the World Trade Center in New York disrupted what it meant be American.

“When that happened there was a peace demonstration on campus and I was so outraged. It was a pivotal moment. I kept waiting for somebody to speak, but not one person did,” she said.

“I just wanted to other side of the story to be heard so that students could know that there was another side to the story. My father would have been so disappointed if I had not said anything.”

What Bearman did in response to the demonstration was send a memo to faculty and staff about her frustration and she also offered her take on the situation and reasons why she supports the actions taken by the United States in response to Sept. 11, 2001.

This sparked debate and controversy about a series of events on campus that were considered by Bearman and others to be disrespectful of American values.

“This country should be remembered. In France, England, Germany, they are all where they are today because of us,” she said.

In order to be what she calls a voice for the other side, Bearman frequently writes letters to the editor of the Campus Times.

On March 14 of this year she wrote, “…Perhaps our younger generation should be told of our many finer moments and battles fought and won for the freedom and dignity of mankind, and of the many peoples of the world we feed, clothe, and bring medical treatment to.

Perhaps we should celebrate our humanity to the world, rather than seize upon our mistakes.”

This letter was in response to another letter that critically analyzed a history of claimed unjust actions by the United States.

“Who the hell doesn’t want peace? But my uncle and father fought for those rights to peace,” she said.

With the most recent conflict in Iraq, Bearman feels that President Bush sent the United States to the Middle East because of 9/11.

She also feels that while war is not the ideal process, it needs to be done sometimes in order for anything to change.

“I don’t know if it was right or not. I don’t want people to be killed. But there are some things worth fighting and dying for and that’s our freedom.

“Evil flourishes when good men do nothing. I believe that is true. In a year the Iraqis will be fed, educated and clothed. And then we will leave. Iraq will not become a Little America,” she said.

“Occupation for a long time won’t work, you can bet on it. We are not there for oil, though we may monitor it for a while.”

It is Bearman’s observation that the reason for initial dissension to the war by the majority of Americans was because of a fear of failure.

“Who wants to go to war? But when we started to win the war, Bush’s popularity rates were at 85 percent. We had to succeed, the U.S wouldn’t have stood for it,” she said.

The shift in support for the war, Bearman feels, came from a sense of unity felt by the American people.

“When American soldiers are out there the public regroups and supports them. Those are our sons out there,” she said.

Bearman feels that it is the American tendency to be generous and open because of the fortunate lifestyles Americans are accustomed to.

It is this tendency, Bearman says, that gives Americans the need to participate in humanitarian efforts such as the one to rebuild Iraq for the progress of its people.

“Maybe I tend to view it in this optimistic light, but I will always feel that way,” she said.

Bearman considers herself to be an “international person” in that she has traveled much and has many friends from different countries.

She, however, thrives and flourishes in the fact that she is American.

“I visited Washington D.C. one year and until then I had no idea what it meant to be American. Everyone should go there.

“We have made mistakes and there is a lot of corruption, but we don’t fear for our lives. I am proud to be American and I am not afraid to say it,” she says firmly.