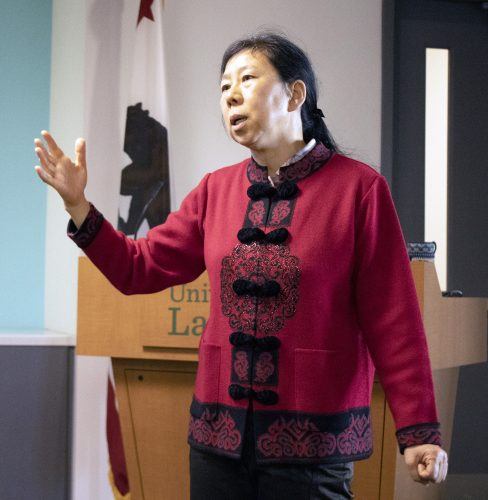 Xiaoyan Lin, professor of mathematics, speaks on the application of approximation theory to real life at the weekly faculty lecture Tuesday in the Quay Davis Executive Board Room. / photo by David Gonzalez

Xiaoyan Liu, professor of mathematics, presented her research on approximation theory and how the theory is used in real life examples on Tuesday in the Quay Davis Executive Board Room.

Approximation theory is a method in math in which simpler functions are used to approximate the answers to more complicated or unknown functions, and falls into the analysis branch of math.

“If you want to predict what will happen in the future, it would be nice to have a function,” Liu said.

This theory can help find those functions, she said. Computers can now calculate polynomials because people have programmed algorithms to find the answer, but approximation theory is used to create those algorithms.

“It is still very much active today, even though it is very easy to use computers to do things. But there are still people working behind the scenes to improve the method in the computer to get better results and faster,” Liu said.

Spline functions in particular were found to have been useful, especially during World War II, Liu said. Spline functions were used to help calculate flight trajectories and build tools.

Using the Yellowstone Wolf Project Annual Report as an example, Liu was able to plug in the known wolf population into a function to predict the wolf population in the future, Liu said. Solving for the equations is the easy part, she added.

“The hard part is in reality you have this model and this function with several number values. Those are called parameters and those are hard to figure out,” Liu said.

Because there are external factors that are impossible to predict, like harsh weather conditions that can kill the wolves living in Yellowstone, it is not possible be exact, Liu said.

Using approximation theory and the function, it is possible to find the estimated number of people infected by the coronavirus as well, Liu said. However, because there are variables that cannot be known it would be difficult.

Ngoc Bui, professor of psychology and interim associate dean of the college of arts and sciences, asked Liu how to build models that are used to test predictions to include additional parameters and variables that remain unaccounted for.

“The message I got from this is the model can work if you know most of the variables in terms of parameters and what you can plug in, but the problem is applying it to biology or even psychology, you can’t know all the parameters and we are limited on what we can collect,” Bui said.

Liu said that there is no limit on how many parameters you can use and that there are people using multiple numbers. Defining the parameters is done differently depending on what is being measured, she added.

“When it comes to real life models it gets increasingly more complex. You can have hundreds or thousands of variables so it’s an endless struggle to find the best way to depict the model,” Sekera said.