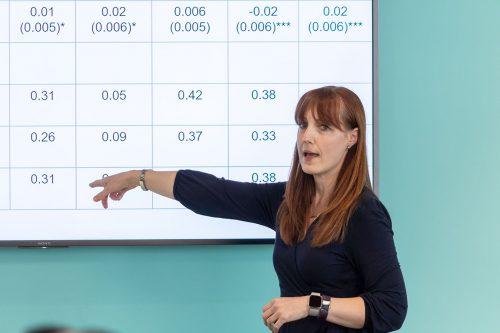 Margaret Gough, assistant professor of sociology, presented her study on the impact of the Affordable Care Act on family formation at noon Tuesday in the Executive Dining Room.

Enacted in 2010, the Affordable Care Act, or ACA, allows dependent children to stay on their parents’ insurance until age 26.

Prior to the implementation of the ACA, children were cut off from their parents’ insurance at age 19, if they did not attend college, or at age 24, if they did.

“As a result, 19 to 25 year olds were the most uninsured group in the United States before this provision was enacted,” Gough said.

With the 2014 expansion of Medicaid, people under 138 percent of the federal poverty level were now eligible.

Previously, only pregnant women, children, the elderly and the disabled could receive benefits.

Gough explained five factors that impact how insurance operates from person to person. Those included insurance policy incentives, such as quitting smoking, which would lower premiums.

Behavior can also be impacted by a person’s potential eligibility for Medicaid or the Affordable Care Act provisions.

Gough’s research looked at family formation patterns in adults between the ages of 18 to 34.

In analyzing dependent coverage provision, Gough set up two cohorts: those aged 23-25, who were subject to coverage, and those aged 27-29, who were too old to be covered under their parents’ insurance plans.

In analyzing Medicaid, Gough separated the data by year and by states, according to whether the Medicaid expansion applied to them.

Gough found that women, but not men, were marrying less after the implementation.

Gough’s study linked Medicaid expansion to an increase in the likelihood of marriage, particularly in men and in those in college.

Women are less likely to pursue marriage, as marriage may have previously been a means to get health insurance from a spouse, she said.

“Women are going into higher education in much higher rates than they were before, especially in more disadvantaged groups,” Gough said. “So, there’s something about having health insurance in a source that’s not work that’s letting women go back to school in a way that men are not doing.”

She also found that, with Medicaid expansion, men and college students are more likely to pursue marriage, while the employed are less likely to do so.

“On the one hand, for men and people in school, Medicaid expansion is reducing a financial barrier to marriage,” Gough said.

“On the other hand, the decrease among employed people may be something strategic about staying under the income cap.”

Gough said she plans to further this study by examining previously unstudied age groups and looking at how health care policy differs between states that are subject to Medicaid expansion.

She also plans to do a more long-term study on the effects of ACA on family formation.

Ngoc Bui, professor of psychology, asked if the survey covered those who received these benefits or those eligible.

Gough said that her study only looked at eligibility.

“Have you thought about the policy implications of this?” asked Kent Badger, professor of health services and management.

Gough said that the policy implications depend on whether increased cohabitation, marriage, and birthrates among those under the poverty line are desirable to the policy maker. Once the desirability of those factors are determined, a policy maker would modify ACA or Medicaid accordingly.

“Don’t you think marriage is going down just because this current generation doesn’t value marriage as much?” Bui asked. “It’s not about marriage, it’s not about access to things. It’s just differences in values.”

Gough said that changing values do contribute to an overall decline in marriage, but she is unsure about the effect between age groups within one generation.

Sharon Davis, professor of sociology, said she was impressed by the scale of Gough’s work.

“I (also) would be asking individuals if they felt that their interest in marriage had been affected by changes in health care rules… I would ask directly, ‘how has this impacted your life?’”