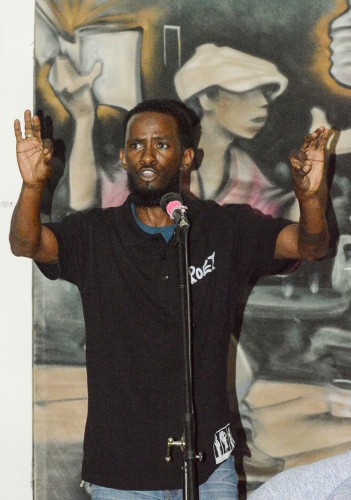 David “Judah 1” Oliver shares his life stories and experiences through poetry Sept. 1 at the dA Center for the Arts’s Open Mic. Oliver, along with others, started Open Mic as a way to build a new community to transcend the social issues of today. Open Mic occurs every first Thursday of the month at the dA Center for the Arts at 252 South Main Street in Pomona. / photo by Janelle Kluz

Poets shared their work in forms of slam poetry, freestyle rap, instrumental music and singing at A Mic and Dim Lights: Open Mic Poetry Sept. 1 at the dA Center for the Arts in the Pomona Arts Colony.

The performances, varying in style and subject matter, all revealed some aspect of the poets’ lives. Through this exploration of the self, the poets form community.

“We want to provide the space for people to express themselves,” said Cory Cofer, host of A Mic and Dim Lights.

Poets often drew from their own lives to cultivate the work they share with the audience, which was partly made up of fellow poets.

Subject matter can be personal, such as struggles with anxiety disorder, creative expression through dance or spirituality, but also political and social issues such as immigration, racism and incarceration.

Poet and author David “Judah 1” Oliver started his work at A Mic And Dim Lights 16 years ago, around the same time when the event was first held.

“I talk a lot about God and nature, the self, politics a little bit,” Oliver said.

“And I write about cotton candy a lot, and apple pies.”

Oliver dedicated a poem to his poetry students.

“I hope they become better men than I am now,” Oliver said.

Another poet, Lee Ballinger, drew from personal experience and addressed social issues in his work.

He admitted to experiencing shame upon encountering a homeless individual, flipping the typical classist script by confessing that he, too, had once been homeless.

During his adolescence, he lived in bus and train stops and, escaped homelessness by enlisting in the army and fighting in the Vietnam War.

“It’s a structural thing in our society that needs to be addressed,” Ballinger said.

“We should forgive ourselves in advance. We can all move forward after we’ve forgiven each other.”
Ballinger has participated in A Mic And Dim Lights for ten years, writing about politics, his mother, football and Vietnam.

The dA Center for the Arts hosts A Mic And Dim Lights on every first Thursday of each month.

Anyone interested in reading poetry or watching others read theirs can sign up. Admission is free and the event is open to the public.