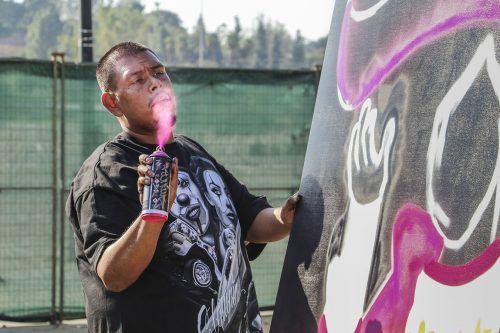 Lazaro Ocampo of Fontana paints a Dia de los Muertos character for altars he created in memory of his grandparents and friend’s daughter for the “En Memoria” event Saturday at the Fairplex. Ocampo works for the Alley Gallery in Pomona, specializing in aerosol painting. He also works for the Setting the Place Foundation, managing art walls in Los Angeles for graffiti artists to express themselves without defacing private property. / photo by Katie Pyne

Miguel Santana, president and CEO of the Fairplex, collaborated with the restaurant Dia De Los Puercos and a Pomona art gallery, the Alley Gallery, to present “En Memoria” Saturday. This is the Fairplex’s first ever Dia de los Muertos and lowrider event through their newly founded venture Mi Poco L.A.

Dia de los Muertos is celebrated each year in the Hispanic culture the day after Halloween. It is a day to celebrate the dead and remember who they were while alive rather than mourn their death.

“This community is very diverse and we want to embrace and celebrate that,” Santana said. “When people think of SoCal they think of cars and lowriders, so we wanted to combine that culture with chicano culture and make a family-friendly event for everyone to enjoy.”

In Los Angeles there are dozens of Dia de los Muertos events that happen all over the city. From Hollywood Forever Cemetery’s enormous music and food festival to an intimate family oriented celebration at Self Help Graphics in East Los Angeles.

The altars were dressed with yellow, orange or black sheets with a tray of conchas and sugar skulls on top. Pictures of deceased loved ones and quotes accompanied the food.

“I decorated mine with a canvas on each side of it,” graffiti artist Jose Sanchez said. “I hope people get to see the altars and really enjoy and appreciate what we are trying to do here. We want to represent Pomona and celebrate our culture through our art.”

Sanchez said the Alley Gallery had been in and out of the Fairplex for the last two weeks preparing the altars and getting the graffiti art done for the event.

The middle of the Fairplex served as the show floor for the lowriders. More than 100 cars filled the lot as more came in throughout the day.

The two middle rows were filled with cars from the same club.

“This isn’t a hobby or something that we do on the weekends, this is a lifestyle,” national president of the Majestics car club China Man said. “We are all about family and supporting each other. There is a misconception that lowriders are affiliated with a thuggish life, but we prove that wrong everyday with making sure our members are family oriented and do not have a shady background.”

The Majestics car club has 38 chapters in more than 20 states, as well as some abroad in Japan and the Netherlands.

Once the sun began to set, performers rolled out and took the stage to bring some energy to the event. Families gathered around the designated dance area ready to have a great time.

“I brought my family out here to enjoy the music, altars, lowriders and culture,” West Covina resident Joseph Lacos said. “We saw this event on Las Cafeteras’ Facebook page and had to make it out.”

Las Cafeteras, an Afro-urban folk band with a Mexican twist from East Los Angeles, headlined the musical bill for the evening.

“We never really play any shows out in the Pomona area, so we’re really excited to play for a new crowd today,” drummer Jose Cano said. “We hope people will connect and enjoy the music tonight and won’t be afraid to get up and dance.”

Las Cafeteras is comprised of civil rights activists who have been performing together around the United States for nearly 10 years for school and community organizations. Their song “Trabajador/Trabajadora” is about working folk supporting and connecting with other working folk, Cano explained.

Santana said this is just the first of many more events to come in the next year and he hopes that they will continue to grow and collaborate with local organizations and businesses.