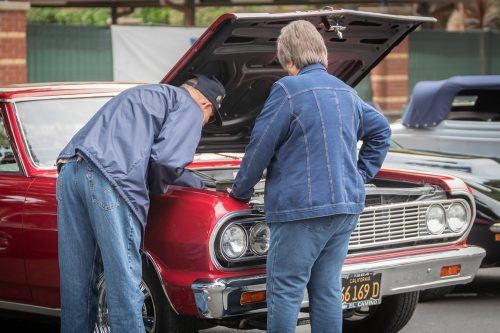 Todd and Sharon Frazier polish off their red 1964 El Camino on Saturday at the yearly Cool Cruise Car Show. The Fraziers also own a 1955 Chevrolet Bel Air. The free event takes place every spring in Old Town La Verne and features live music, food and booths. / photo by Ariel Torres

Rock `n’ roll and blues echoed through the streets of Old Town La Verne at the Cool Cruise car show, where families showed off their classic cars, Saturday.

Ben Perez, Los Angeles resident, showcased his red 1965 Lincoln Continental. He said he has dedicated countless hours into restoring and maintaining his car.

Perez explained that restoring cars has been a family tradition and, it is something he has been passionate about his whole life.

“Having these type of car shows help the public know there are still family events the kids and parents can enjoy,” Perez said. “Coming from East L.A., these types of restored beauties can be seen on every street and I want to keep this hobby alive.”

The streets were filled with families walking in between the rows of classic cars on display.

Suzanne Goddard, San Dimas resident said she was attracted to this event because of a Facebook post and decided last minute to bring her family.

“I always prefer to bring my kids out than keep them cooped up at home watching television and playing video games,” Goddard said. “The effort that people put into these classic cars is very apparent and astounding.”

Bob Dawson, Pasadena resident, showed his blue 1969 Ford Mustang at the show and was blasting Elvis Presley’s “Blue Moon” as a tribute to his grandfather who gifted him the car for his 16th birthday.

“My license place has said “69 beast” since I got it from my popps and to this day I still honor him by keeping those plates every year at the DMV and playing ‘Blue Moon’ for him,” Dawson said.

Dawson explained that he does not plan on selling his Mustang because of its sentimental value, and he plans on passing the car down to each generation in his family.

Dawson said he would rather show off his car at these shows rather than keeping it locked up in his garage.

Dom Williams displayed his yellow 1960 Volkswagen Beetle, and its seeming brightness on the cloudy day had spectators in awe.

“The color of the car is what always catches the eyes of people walking by and it does get kids attention and for some reason the kids always want to hit it like a fly swatter,” Williams said.

The proceeds raised from the Cool Cruise car show and donations of canned foods were donated to the Orange County Food Shelter.