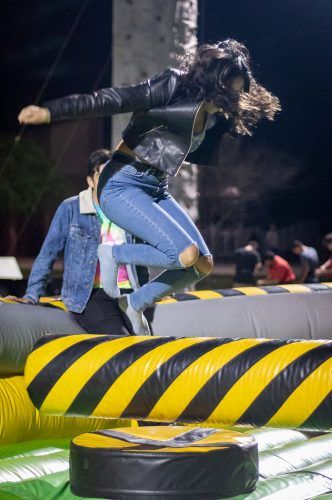 More than 800 students came together last Thursday for a night full of live music, food trucks, and fun activities at the third annual Carniverne event at Campus West.

Food vendors were scattered throughout the entrance of the event, including In-N-Out, El Charro Tacos, Poutine Brothers and more.

Carnival games and activities surrounded the perimeter of the field, while some students gathered in the center to enjoy the music and the dance floor, others enjoyed laser tag, rock climbing, interactive inflatable games, and traditional carnival games, like a bean bag toss and a high striker.

Students had a chance to win Astroverne hats and T-shirts, by playing carnival games.

Other raffle prizes included Beats by Dre, an Apple watch, a Nintendo Switch, Airpods, and the largest prize, a three-day pass to Electronic Daisy Carnival in Las Vegas.

DJ Erick M and girl group Viaa had crowds of people on the dance floor for most of the night.

Marcus Blevins, sophomore business administration major, said he would like to see more events like Carniverne that bring people together throughout the whole school year.

“I’ve seen people I’ve never seen before at school. I’ve met three new people while I was down there dancing,” Blevins said.

Freshman criminology major and winner of the 3-day EDC pass, Jessica Carillo, was not ecstatic about winning the electronic dance music festival pass.

“Well they told me it’s only one ticket, so that kind of sucks,” Carillo said.

A balloon artist was also at Astroverne making custom balloon figures, like Mickey Mouse and crowns, per request.