By Ariel Torres, Nicolette Rojo on November 2, 2018 in News 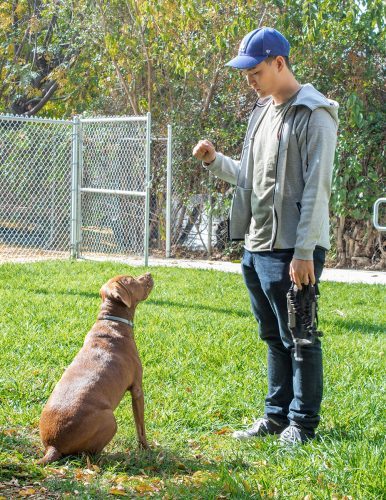 Senior e-commerce major and veteran Brian Ma trains Rocco, his service dog, in the backyard of the Veterans Center Monday afternoon. The Veterans Center is open Monday through Friday 9 a.m. to 6:30 p.m. and is located on 1860 Third Street. / photo by Ariel Torres

Many veterans, including veteran students at the University of La Verne, suffer from Post Traumatic Stress Disorder, and other mental health issues of which affect their daily lives as they return to civilian life and pursue their education.

Ruben Ramirez, a veteran and CAPA educational studies major, said the Veterans Center has been helpful not only academically, but also emotionally, thanks to the comfort and interactions with other veterans.

“It’s good to just be around other veterans,” Ramirez said. “We’re all going through the same thing, we’re all older. Sometimes we get really stressed out and it helps to say the stuff that’s on your mind… especially when you’ve been on duty, where you’re taught to suck it up. Having outside counselors through the VA and referrals help out a lot.”

Ramirez admits that being a veteran student is tough at times because the mentality in the military is different.

“I ask if people who have depression or anger would have those feelings before or does the military create that,” Ramirez said.

Diana Towles, coordinator of the Veterans Success Center, said that choosing “Thank You for Your Service” as the One Book, One University selection, and bringing the author David Finkel to campus last month, was good for raising awareness.

“Every single meeting that I’m in, I’m always talking about what we’re going to do for the adult student and not just a traditional undergrad student,” said Towles, a veteran herself.

“I was warned that the book could trigger some of their PTSD, which it did, so I had to tell them to pull back if they felt those feelings.”

Towles said that sometimes these experiences are necessary, so that those triggers can come out to help veterans process their own experiences.

Brian Ma, veteran and senior e-commerce major, said that while he enjoyed Finkel’s book, he felt that it can possibly give the message that only veterans suffer from PTSD and are the only ones experiencing traumatic events.

“It’s something that anyone can actually really go through,” Ma said. “It’s more relevant than specifically aiming it towards vets. It is (also) a real side of what vets go through.”

Within the last few years, veteran students had begun to speak about the lack of resources for veterans on campus.

This led, in part, to the opening of the Veteran’s Center this year.

Michael Zschoche, a veteran and CAPA psychology major, felt support across campus from faculty and professors to administration not only for himself, but for veterans as a whole.

“I would definitely give the support a 10 on a scale,” Zschoche said. “I’ve never had a bad experience with the administration; I’ve always had good experiences, particularly with the support of Ann Jeffers.”

Veterans have a variety of options for healthcare, particularly mental health services, including the government funded Veteran Affairs department and Tri-City Mental Health Services in Pomona. Tri-City offers veteran services and employees who have veteran-type experiences, including a one on one program called “Vets Helping Vets.”

“With Tri-City, the biggest problem I come up against is that there is a fee,” Towles said. “While the VA is free, it is hard to get an appointment since it takes a while to set one up.”

For Mark Soto, CAPA business administration major and president of the Veterans’ Club, the VA and Tri-City options are out due to the extensive amount of paperwork and criteria.

“If it has the word VA on it, you know it’s going to be a lot of paperwork and a bunch of headaches,” Soto said. “I don’t want to deal with all of these criteria, so I didn’t really look into it; there’s always a catch to something. I’d rather pay more and know that I’m fully covered.”

Nicolette Rojo can be reached at nicollete.rojo@laverne.edu.