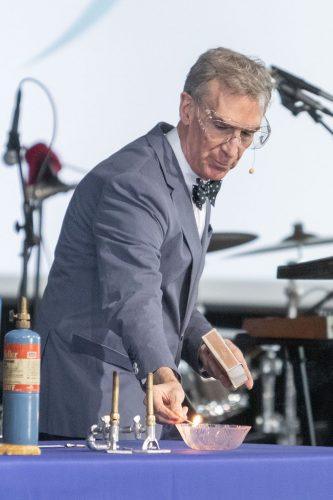 Television science star Bill Nye demonstrates a fire and gas experiment during the second day of the annual STEAM event March 16 at the Fairplex Planetary Stage. His presentation was recorded for a new episode of his show, “Bill Nye Saves the World,” available for streaming on Netflix. The three seasons explore important science issues with guests who help Nye test his theories. / photo by Ariel Torres

Bill Nye, host of PBS show “Bill Nye the Science Guy” and current CEO of the Planetary Society, spoke to younger generation on various ways to combat global warming during the STEA²M Fair on March 15-16 at the Fairplex.

Children and parents attended to learn more about the various fields offered, as well as to attend Nye’s lecture which focused primarily on the importance of recognizing climate change and ways to protect the Earth — such as investing in solar and natural energy resources.

The intent of the fair was to educate the public about science, technology, engineering, arts and mathematics, hence the acronym.

In previous years, the fair focused on traditional STEM fields such as engineering, information technology and the sciences.

However, this year’s fair highlighted the importance of art and agriculture within the job industry, which was demonstrated by adding a square root to the “A” in the acronym STEAM.

Yasmin Cardona-Byrnes, University of La Verne alumna and professor of art at Mt. San Antonio College, said she attended the lecture because she was inspired by Nye growing up, which reminded her why she chose her career path.

“I come from a home where I was sheltered and didn’t have access to museums, extra tutoring or learning-rich experiences,” Cardona-Byrnes said. “Seeing Bill today made me remember why I do what I do today: to inspire others, be curious, learn and connect to the world around us.”

Benjamin Lehan, professor of epistemology at the Cal Poly Pomona School of Agriculture, said that including agriculture in the fair helped demonstrate its role in science and impact in a person’s daily lifestyle – from eating to clothing themselves each day.

“No matter what crop we grow, there’s always insects that attack that crop, so we need to find out efficient ways to control those pests,” Lehan said. “On top of that, people don’t realize that the clothing we wear is an agricultural commodity and with everything we do to produce them, insects are trying to stop us from doing that.”

The arts section included schools in the Pomona Unified School District that advertised their various school programs, including Village Academy High School, a school dedicated to students looking to get a jump start in film and television.

Their booth displayed a slideshow of their award winning short films and an opportunity for children to fly drones in order to learn more about the usage of modern technology within the film industry.

Reese Sorensen, senior at Village Academy, said that seeing the kids’ excitement on their faces was the most rewarding part of the STEAM Fair experience.

“I love to inspire a lot of people to do what it is that they want to do, along with being able to have a relationship with them, whether it’s being there to let them talk to me or to ask questions,” Sorensen said.

The fair featured various activities for children, including shows such as The Magic of Science and Discover Einstein, where both hosts shared scientific principles through magic.

Barry Cutler, or “Dr. C” during “The Magic of Science,” said he enjoyed the audience’s engagement throughout the weekend, along with the children’s interest in science.

“Science is one of the great things in our world to be interested in,” Cutler said. “It’s wonderful seeing all of these intelligent people have an interest like that.”