By Jocelyn Arceo, Tyler Evains on May 4, 2018 in Arts, Etc., Feature Slider, Theater 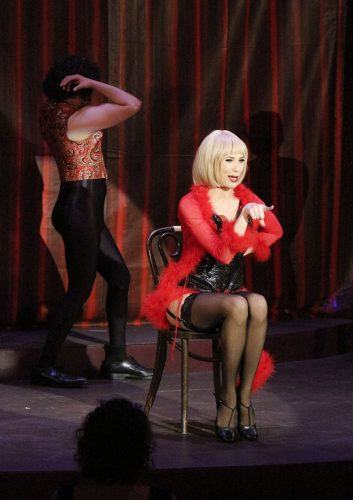 Lauren Smolka, who plays Sally Bowles in the musical “Cabaret,” sings “Don’t Tell Mama,” a song about her secret life as a burlesque performer, while cabaret boy Hans, played by Dante Kenway, dances Saturday in Dailey Theatre. The musical, set in 1930s Berlin, portrays life in a risqué nightclub against the backdrop of the rising Nazi rule. “Cabaret,” has three more performances at 7:30 p.m. Friday and Saturday, and 2 p.m. Sunday. / photo by Tyler Evains

Red lighting filled the room, with a smoky view of the stage where small restaurant tables covered in white cloth and wine glasses were placed in front.

“Cabaret,” a musical set in Berlin during the rise of Nazi Germany, began with a welcoming song as an introduction to the Kit Kat Klub.

The musical opened April 26 and continues through Sunday in Dailey Theatre.

The performance Saturday was emotional and occasionally comedic.

“It’s very sensitive subject material, but I feel like it needs to be said because it was a real thing that happened. Some people deny it actually happened,” Riley Mawhorter, a freshman at Cal State Fullerton who plays the American character Clifford Bradshaw, said.

“It was a real problem back then. I believe this show kind of brings that to light in a sort of comical way.”

Mawhorter played Bradshaw, an American author who traveled to Berlin in hopes of finding inspiration for his new novel.

The audience watched his character grow from a shy, awkward man trying to understand the approaching political rise, to someone who takes a stand for what he believes is right in the end.

“It’s all about getting into the role, when I go up I am a different person,” Mawhorter said.

“I try to change my personality on stage to match that of the character’s.”

Bowles is a woman who is staying in Berlin and dancing as a cabaret girl in the Kit Kat Klub to get by.

Bowles comes across as a sexually liberated, independent woman who makes money through her own volition.

“I’ve never played a role that is so versatile and is literally nothing like myself,” Smolka said.

“It definitely is very draining, but honestly so rewarding to tell a story that has so much power and so much truth.”

The audience sees Bowles get taken through a whirl-wind of issues, both internal and external, to help her understand the bigger picture of things.

Bowles evolves as a person through the help of Clifford Bradshaw.

“It’s very easy to get distracted by the little things in life and if you don’t pay attention, something really bad can happen,” Smolka said.

Smolka said she thinks that it is an important story to always tell, and if it is not retold, then history is doomed to always repeat itself

Briana White, sophomore theater major, played the role of the Emcee of the Kit Kat Klub.

She sang multiple songs, including “Willkommen,” and another about seeing a lover through her eyes as not Jewish at all.

The intense ballad played while the actor playing the Jewish lover was dressed as a monkey, as to portray the demonization of Jewish population.

Throughout the song, the lyrics described an actual monkey.

That made the audience believe that was the intention.

It wasn’t until the last line of the song that it reveals the lyrics were about the Jewish character the entire time.

“It’s my third night doing this and every night it really gets me,” White said. “You just have to keep the emotion up, and if you don’t prepare yourself for something like this, it’s so horrible, you just let it overtake you.”

The role of the emcee was light-hearted at some points, and very intense at others.

White’s role was versatile in the sense that she was able to start off so strongly with an animated character at the beginning of the show, but still able to leave the audience shocked and in awe by the last scene.

“I’m a very shy person but being on stage you become the character that you’re playing. That ending scene especially, it’s so hard to feel that emotion,” White said.

“The last scene really bothers me, having to do something like that is very hard for me.”

Shultz faced a bumpy road in doing so because she had friends who were either Nazis themselves, or Nazi sympathizers.

“I think it went really well,” Stribbell said. “There are always small things to work on after shows, but I’m excited to get back at it on Thursday.”

The “Cabaret” performances will continue their run in the Dailey Theater at 7:30 p.m. Friday and Saturday, and a special showing at 2 p.m. Sunday.

There is a $20 suggested donation for all in attendance.