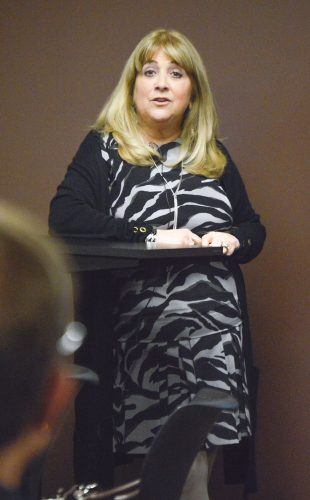 Audience members filled out surveys identifying their role models, important people in their lives, and activities that are important to them and possessions that hold value for them. Nikki Shipley, assistant professor of public and health administration, instructed everyone to cross out one item on each list.

“You are now homeless, and this is what you have left,” Shipley said.

She incorporated the exercise into her presentation to show that homelessness does not discriminate. The goal was to humanizes the homeless for the audience, Shipley said.

Many people ignore those asking for money on the streets thinking that person will use it only to buy drugs and alcohol.

Not all homeless got there because of substance abuse, Shipley said.

“If I had to survive on the streets, I’d use drugs and alcohol too,” Shipley said.

Shipley grew up on the outskirts of Beverly Hills where there were five homeless people the neighborhood knew.

When she asked her mother about them, she would tell her that they were alcoholics.

Shipley and her family would take blankets and other resources to those people, an experience that inspired her passion for helping the homeless now.

Skid Row in downtown Los Angeles is now spread across 16 square blocks. Some of the population even brings furniture to make living on the streets as comfortable as possible.

This is a crisis for the homeless and for the businesses because people must pack up and hide until the stores close – then they can come back out.

The shops lose business with shortened hours and the homeless have to be shooed from the minimal home that they have so that customers will feel at ease.

Public spending on Medicaid and other resources for the homeless is rising, and that money could be spent on housing, saving local governments money.

“If we get people into housing, other things will come along.”

Once people don’t have to worry about having a place to sleep or where they will get their next meal, they can focus on getting jobs, their health and enriching their lives instead of basic survival, she said.

More people are becoming homeless because of the economy, even those with full time jobs.

A minimum wage paying job is not even enough to pay rent in most of Los Angeles, but is too much to receive affordable housing services.

Shipley is involved with homeless housing programs, including Housing First and Rapid Re-Housing.

Housing First is a harm reduction approach for individuals who are chronically homeless. The housing projects tolerate drugs and alcohol use and tenants may come and go as they please as long as they don’t harm themselves or others.

“The idea is that they will come to trust us and want to use our services,” Shipley said.

The program assists its recipients with getting back into a regular life routine to eventually be self-motivated again.

Rapid Re-Housing gives immediate shelter and financial support to families who are newly or on the verge of being homeless, especially because boys at least aged eight are not allowed to stay in shelters.

“Where are we going to build?” humanities professor Al Clark asked at the end of the lecture.

Shipley equated this question with “not in my backyard.” She talked about options such as turning retail-declining malls into temporary housing.

Alumnus Charles Davis, who graduated from ULV in 1948 and often attends faculty lecture said he was glad to see the problem being addressed.

“I’m very glad to see we… have people like her devoting their life to the problem,” Davis said.