By Jolene Nacapuy, Michelle Leon on February 27, 2015 in Basketball, Sports 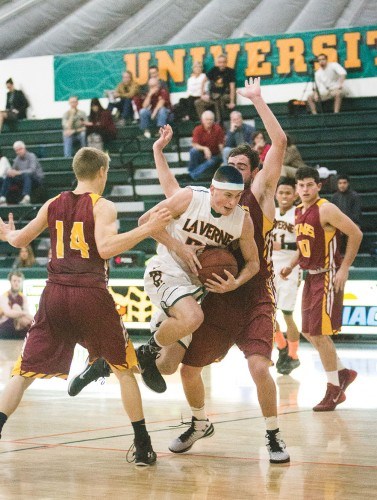 The men’s basketball team faced a tough loss in its last game of the season to the Claremont-Mudd-Scripps Stags Tuesday at Frantz Athletic Court.

The Leopards wanted to send out their four seniors on a win, but were unable to do so, as they lost 95-45.

The team ended its season with an overall record of 9-16 and 5-11 in Southern California Intercollegiate Athletic Con­ference play.

“I’m disappointed that we couldn’t get our four seniors a win on their final home game,” head coach Richard Reed said.

“Josiah, Karl, Niall and Brett have meant so much to our program so I’m disappointed for them, that they couldn’t go out with a win on their home floor,” he said.

Four seniors, forward Josiah Sukumaran, guard Karl Reyes, center Niall Harrison and forward Brett Stephan did not finish their last game of the season with a win, but are still proud of the team nonetheless.

“We struggled to find that chemistry and put together a winning formula,” Harrison said.

“But we have a hard working team and great group of guys and I don’t view this as a disappointment but a good learning season,” he said.

The Stags started off the first half with the lead hot and shot eight unanswered points in the first three minutes.

Senior forward Brett Stephan put in a layup to put La Verne on the board, 8-2.

Stephan finished the season with 5.7 points per game. He also shot 73 percent from the free throw line.

Senior guard Karl Reyes answered back with a jumper and cut the lead to 15, 34-19 with less than eight minutes to go.

The Stags’ defense continued to overpower the Leopards, which prevented them from getting shots up.

“It was a very physical, hard fought game and we couldn’t stop CMS,” Harrison said.

“We didn’t have the best game and they did so it didn’t work well for us in the end,” he said.

The Leopards went into halftime trailing, 58-27, as the Stags shot 74.2 percent from the field.

“It was difficult for us to keep trading baskets with them when they got up with that big lead,” he said.

La Verne trailed by 31 points as they headed into the second half of the game.

CMS did not stop from there, as they opened the half with three straight three-point shots.

With that, they led the Leopards, 75-32, the largest lead of the entire game.

Reyes answered back quickly with a three-pointer of his own, assisted by Harrison, as he attempted to cut the lead to single digits.

With high hopes to finish strong, La Verne went on a 14-2 run with shots from Reyes, Stephan and junior guard Weston Newell.

As time ran down, the shots were not enough.

“It was a combination of all our hard work. Our season didn’t go the way that we wanted, but we don’t quit,” Sukumaran said.

“This game, we approached it like any other game and we just wanted to win,” he said.

CMS had the last shots of the game with two free throws and ended with the 40-point win, 95-55.

Sukumaran had a game-high 11 rebounds to finish the game.

He finished the season with 191 rebounds.

“It was an up and down season, but we definitely did have some hot points,” Harrison said.

“We did something that hasn’t been done in school history, which was sweep in a tournament during the preseason, which was a great start for us,” he said. Harrison followed with 10 points.

“It’s a bittersweet feeling, but it’s been a blessing to be here for four years under coach Reed, who is a great coach and mentor,” Harrison said.

“It’s been a great experience, but at the same time it’s time for other guys to step up and have their go at having a successful career,” he said.

He finished the season with 107 total rebounds and averaged 4.5 rebounds per game.

“We obviously had high hopes this season. We thought we were a team that could make the conference tournament, have a chance to play in the national tournament, but we were just unable to do that,” Reed said.

“I feel bad for our seniors, who have given a lot toward our program, but feel good how our players ended the year and didn’t quit so we’ll just have to build on this and get better for next year,” he said.

The Leopards did not make it to the top four and finished their season ranked seventh in the SCIAC standings.

“I’m proud of our player’ efforts and thought that we competed for the entire 40 minutes,” Reed said.