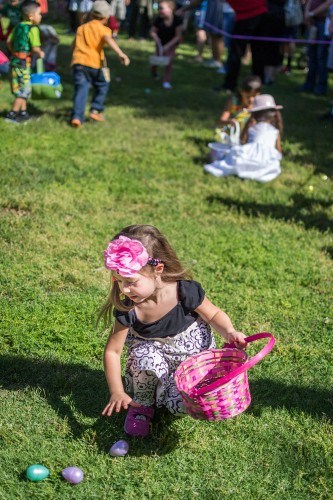 Ashlyn Connolly, 4, participates in her second egg hunt, but the first by herself, during Claremont’s Spring Celebration Saturday in Memorial Park. Connolly found eight eggs in the 5-7 age group designated area. / photo by Helen Arase

Volunteers from the Rotary Club of Claremont and Kiwanis Club joined forces to help run the event.

“This is a great family event, so this is a nice opportunity for families and the community to get together and celebrate their weekend here and kickoff Easter,” said mayor of Claremont, Corey Calaycay.

Large colorful balloons designate areas of fun throughout the park, from tug-o-war, arts and crafts, a magician, egg tosses and a petting zoo.

Music played loudly in the air with a special thanks to an area called Instrument Petting Zoo.

Children with faces painted with animals were given lessons with different types of instruments, such as the cello, guitar, drums and violin.

Next to the fun sounds were craft areas where children and adults could build a variety of Easter decorations.

Rabbit ears, masks, baskets and headbands were a few of the things made and colored in the craft area.

Glitter and papers flew around the messy tables, as many gathered around to create the Easter-themed arts and crafts.

“We have a lot of community interest and support and people really enjoy having an event like this to come out to, especially this holiday weekend,” Calaycay said.

This event has taken place for more than 30 years in Claremont and continues to be a delight in the area.

“We used to live here in Claremont and still come here every year just because we like the coziness and the fact that it’s like a family here,” Lien Nguyen, resident of Chino Hills, said.

A magician had a few tricks up his sleeve during the event, as he engaged the audience in his act. Children screamed in excitement, as they all wanted a chance to be the next one up on stage.

The magician pulled up many participants to take part in his acts, such as turning ripped purple and black gift-wrap paper into a green paper hat.

“The magician was our favorite part of today,” Nguyen said.

“He pulled out the bunny and it was passed around and the children got to pet it,” she said.

Children walked around the park with colorful handmade baskets in preparation for the egg hunt.

The event had four different egg hunt areas, which no adult was allowed to enter.

Once the whistle was blown, the children rushed into each area, as eggs and candy flew into the sky.

“It was a bit chaotic, but super fun for the kids,” said Diane Torres, La Verne resident.

“We were a little late with the egg hunt, but they were able to get bags that they save for the kids that missed it or didn’t get any, which is very, very, very helpful and keeps them smiling,” she said.

Left and right, children picked up a variety of colorful eggs and candies to put into their baskets, along with a golden egg.

With much success of the event throughout the years, many local residents hope to keep coming back to the event and continue to make it a tradition.

“This is our third time at this event and just love the family feeling it continues to bring,” Nguyen said.

“We brought our son when he was just an infant and have made it a tradition of coming here,” she said.