By Alondra Campos, Danielle De Luna on December 6, 2019 in News 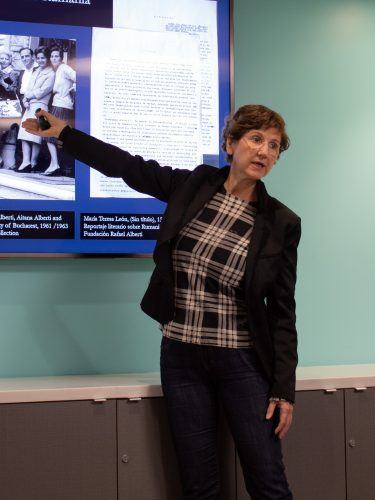 Gabriela Capraroiu, associate professor of Spanish, presented “Umbral De Romania: Critical Edition of the Unpublished Travel Memoir About Romania” on Tuesday in the Executive Dining Room. She is currently in the process of editing her book that will include her research. / photo by Danielle De Luna

About 10 students and faculty attended the second to last faculty lecture of the year to learn about Spanish writers whose works were published and translated into different languages.

The two most emphasized Spanish writers discussed in the lecture were Maria Teresa Leon and her husband, Rafael Alberti, who wrote travel books about Romania that they translated into Spanish.

“These writers established a political connection between Romania and other European countries during the 18th century,” Capraroiu said. “They were sent by journalists and newspapers to areas of Europe and translated works of others to Spanish.”

“Umbral De Romania: Critical Edition of the Unpublished Travel Memoir About Romania” dives into the travels across Europe of De Leon and Alberti as well as Chilean poet Pablo Neruda and Miguel Angel Asturias.

“Maria De Leon and Alberti were part of the writers’ union in Romania and it was through their translations of Romanian works that a cross-over between cultures was established during the 18th century,” Capraroiu said.

In her travel memoir “Memoria de la Melancolia” De Leon describes her travels to Constanta, Romania and her different observations of iconic landmarks, such as the Roman Statue of Ovid dedicated to the Roman poet Publius Ovidious Naso.

Ovid was banished to ancient Tomas by Emperor Augustus.

Capraroiu displayed a map she created herself depicting the first trip from start to end that De Leon took to Romania in 1958.

Capraroiu’s map contains pins and strings that illustrate the starting point from a Russian train to a variety of cities, including Kharkiv, Batumi and Naples.

Throughout her presentation, Capraroiu displayed images of De Leon’s original writings as well as images of structures in Europe that resembled Romanian features.

Quinn Frigeri, senior behavioral science major, who attended the lecture wanted to know more about the buildings and architecture in Romania that Capraroiu explored.

“Are the buildings in the images still the same today or do they look different now?” Frigeri asked.

“A lot of the old past is still standing if you visit today, but anything associated with Communist Romania is not,” Capraroiu said.

Capraroiu is in the process of editing her book that will include the extensive research she has conducted.

The last faculty lecture of fall will be from noon to 1 p.m. Tuesday with Adrian Velazquez, associate professor of public administration.