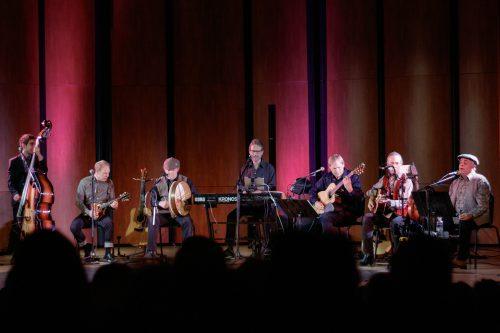 Michael Ryan and Friends perform “Isle of Hope, Isle of Tears” by Seán Keane, a song about immigrant Annie Moore’s journey from Ireland to Ellis Island. The band performed a variety of other Irish ballads during the “Spirit of Ireland” concert Sunday in Morgan Auditorium. / photo by Danielle De Luna

Upbeat Irish pub songs, graceful dancers and laughter lit up the Morgan Auditorium at the “Michael Ryan and Friends: The Spirit of Ireland” show on Sunday evening.

“This was a new experience for me, I never have listened to Irish music before,” said Alyssa Alvarez, sophomore accounting major. “It felt amazing to be a part of such an active crowd and connect with the performers.”

The auditorium had a full house and audience members actively engaged with the musicians by clapping and singing throughout the performance.

The musical group consisted of seven musicians who played the keyboard, guitar, bouzouki, flutes and bodhrán.

The bouzouki and bodhrán are traditional Irish instruments.

The bouzouki is similar to a guitar, but it has a spherical body with a flat top in the shape of a teardrop and a longer fretboard than a guitar with four pairs of strings.

The bodhrán is a frame drum, which means it has a similar structure to the drum but it has one open-ended side and is much shorter than a drum. It is more similar to a tambourine because they are both slapped as a playing technique.

The instruments were used to play songs about love, turmoil, immigration and four leaf clovers.

The stage was illuminated in red, green, purple and pink lights that would oftentimes change with the rhythm of the music.

Two female dancers from San Dimas’ Tamora School of Irish Dance tapped and jumped to the beat of the Irish songs in black sparkly dresses as the performance carried on.

Annie Johnson, a ULV alumna, also performed with the group, singing traditional Celtic folk music, while the lights on stage turned purple and pink to synchronize with the slower pace of the song.

“I’ve always felt called to my Irish side. I love when songs tell a story, even if someone cannot connect to the song directly, they can connect to the feeling,” Johnson said.

Band member Hai Muradian also sang “Head Over Heels,” it was a smooth love song about his wife. The crowd clapped along with the beat, seeming to connect with the romantic feeling of the song.

“It gives me the biggest kick when I’m up here and I have the greatest times. It’s so naturally fun to me,” Muradian, a rock and roll musician and songwriter, said.

In between songs, the group would tell humorous jokes and stories to engage the audience.

Laughter filled the auditorium as they told jokes about Irishmen, pubs and clovers.

Towards the end of the show, Ryan sang “Song for Ireland,”which was originally composed in 1984 by English folk artists Phil Coulcough and his wife June Coulcough.

The song was about Irish pride and healing after losing people during wartime.

A projector also appeared for the audience to visualize the serene Irish landscape, and images of lush hills with green grass, mountain sides and rainbows.

“Irish people think of Ireland as a living being and we sing to it. It is like a life support and mother to the Irish,” said Michael Ryan, songwriter and ULV music instructor.

The show ended with a sing along that included all the performers. The dancers were in the center and performed a contemporary riverdance to the music of Michael Ryan and Friends.

The combination of dancing, singing and music resulted in an overwhelming cheer from the crowd.

The performance received a standing ovation from the audience, and many stayed after to compliment the musicians and purchase their CDs.

Michael Ryan and Friends perform weekly at Walter’s Restaurant, Bar and Lounge in the Claremont Village on Thursdays from 6 to 9 p.m.

Upcoming performance and other information can be found on michaelryanmusic.com.

Krista Huey can be reached at krista.huey@laverne.edu.