The La Verne Police Department observed an up-tick in participation during National Prescription Drug Take Back Day last Saturday, though official state and national statistics will be released later this month.

Held twice a year in October and April, the program allows people to drop off unused prescription medication at participating locations with no questions asked. The only items prohibited from disposal were needles, liquids and inhalers.

“Already within the first hour we’ve seen more people than we have at previous Take Back events,” Officer David Stitt said. “A lot of people are saying that they saw it [advertised] on TV.”

“I take all the boxes to a neutral location, in this case a warehouse, after the event is over at 2 o’clock,” Zapata said. “Then later, all of the prescription is incinerated by SERRF [Southeast Resource Recovery Facility] in Long Beach. I report the amount of prescription from my assigned location by weight, and we get the nationwide statistics about a week after.”

Although the program was designed to serve the community and prevent drug abuse, some doctors abuse the opportunity to dispose of prescriptions on Take Back Day, Zapata said.

“We’re not supposed to accept anything from doctors,” Zapata said. “Every year Kaiser or whichever hospital gets a budget from the state to dispose of medication, but what some doctors were doing is dropping it off here and using that portion of their budget for other things. In the end, we have to pay to have the drugs incinerated which is really something we’re all paying for in taxes.”

In October 2018, Take Back Day totals amounted to approximately 10,878,950 pounds nationwide, including Puerto Rico and the Virgin Islands, according to DEA statistics. Records show that these numbers reflect a 91% increase from the October 2017 collection date.

The total weight collected in California on October 2018 – 959,210 pounds – surpassed the nationwide total in October 2017. In order to address increased participation, drop off locations have expanded beyond police or sheriff’s departments, Zapata said.

“They also have locations at clinics and Smart and Finals,” Zapata said.

The police department also has a permanent prescription disposal bin installed in the lobby for people to drop off medication at their convenience throughout the year, Police Services Technician Adriana Ratiu said.

“We installed the bin in October of 2018 because a lot of citizens were asking where they could dump their pills,” Ratiu said. “This is the first time we’re emptying it, and we’ve collected about 100 pounds since it started.” 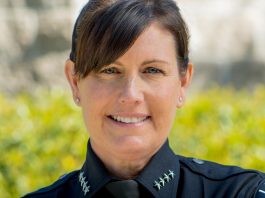