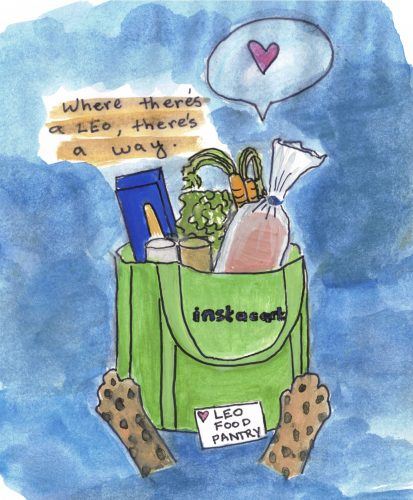 The Leo Food Pantry will reopen next week and has planned distribution dates for April 29 and May. The food service temporarily closed when the University of La Verne announced its closure due to the coronavirus pandemic.

Grocery stores throughout the country saw most of their shelves empty due to the panic buying during the entire month of March.

“We typically rely upon getting large bulk food from sources like Amazon, Costco and Smart & Final, but because food is not available in large quantities, we had to get creative,” Wagoner said.

Some ideas they came up with included asking faculty, staff and alumni to order Instacart bags and gift cards delivered to the Leo Food Pantry. Although thankful for the help they received, it was not enough to meet their usual supply. However, the Leo Food Pantry began picking up momentum when they then sought help from the University’s food service, Bon Appétit.

With the supply figured out, the team at the food pantry had to then discuss their distribution routine, which is undoubtedly affected by the social distancing orders.

“We are allowing people to park in front of or near Hanawalt, and we will have cones out to enforce social distancing,” Hugo said. “We have to be part of that solution, to make sure we aren’t creating an environment where someone could get sick.”

Hugo explained that social distancing will be required during distribution as well as only two meal options, vegetarian and standard, to minimize time and potential crowding.

Mark Ruiz, sophomore business administration major and student lead at the Leo Food Pantry, said that the hardest part about all of this was canceling their March distribution.

“We’ve never had to cancel a distribution. Making that decision and not getting those supplies out was the hardest part,” Ruiz said. “Thankfully the April distribution is proceeding since we were able to get some supplies. We are trying to do the best that we can.”

Food insecurity among college students nationwide was an issue even before COVID-19. A 2019 survey conducted by the Hope Center for College, Community and Justice, found that nearly 40% of college students were food-insecure. However, there are fears that number increased since the coronavirus pandemic began. This is a reality Adrianne Camacho, case manager for student affairs, who has seen an increase in student applications for the Student Emergency Fund.

“We’ve gotten close to 200 applications so far and each student has said that part of the money would go towards bill and food for the most part,” Camacho said. “Part of the Emergency Fund is hoping the Leo Food Pantry can supply the food, so the money we grant them through the emergency fund can go towards their bills.”

The Leo Food Pantry encourages cash donations which can be made at their page on the University’s website.

Aaron Arellano can be reached at aaron.arellano@laverne.edu.