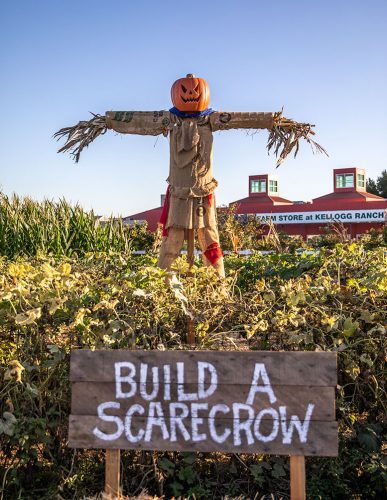 The main attraction of the festival is its wide selection of harvested pumpkins on sale for $5 each.

The festival also offered an array of exhibits, vendors and food trucks for visitors to enjoy.

Many exhibitors gave visitors a chance to experience and explore agricultural processes and history.

Vice President of Upland Heritage John Atwater displayed an impressive amount of tools and artifacts from the farmlands of America’s past.

Since retiring as Upland’s city senior planner, Atwater has dedicated his time to sharing his historical knowledge.

He said he has been exhibiting at the Los Angeles County Fair since 2011 and at the Cal Poly Pumpkin Festival since 2014.

Atwater said he hopes to give new generations a glimpse of the orange groves and dairy farms that once covered Southern California’s now urbanized landscape.

President Jose Amezcua shared his knowledge of beekeeping and honey harvesting as he sold honey sticks and jars to patrons.

Amezcua said this was the association’s second year participating in the festival.

“As you can see this is all the product we have left,” Amezcua said. “People come here just to get their winter supply of honey.”

Amezcua said that the standard for honey varies among generations.

“Do you see the flecks of amber inside? That’s how you tell that it hasn’t been pasteurized,” Amezcua said. “A lot of people that come through here like to see their honey a little dirty now. If its too clean, it’s not natural, raw honey.”

Karen Martin, manager of graphic and distribution services at Cal Poly Pomona, has been a vendor at the festival since its inception in 1992.

“I’ve been here for 25 years and it keeps getting better,” Martin said. “I think the pricing [of the festival] is fair and it’s made the environment more enjoyable for the families and the workers here.”

Martin said she began her crafting as a form of physical therapy, but continued because she ended up enjoying the creative process.

“I like taking things and making them into something else,” Martin said. “It’s therapeutic, you forget all of the stuff that’s not important.”

Martin said she tries to give newer vendors, like Velvet Toledo, advice on pricing items and selling at the festival.

Toledo, owner of I Heart Jars By Velvet, began selling at the Pumpkin Festival a year ago.

Her inventory is a variety of hand painted mason jars ranging between $5 to $10.

“I love making the holiday themed jars,” Velvet said, pointing to some Halloween themed jars. “I can’t wait to come back next year.”

This year’s festival has come to a close, but Cal Poly’s Pumpkin Patch will be open Tuesday through Sunday throughout the month of October.